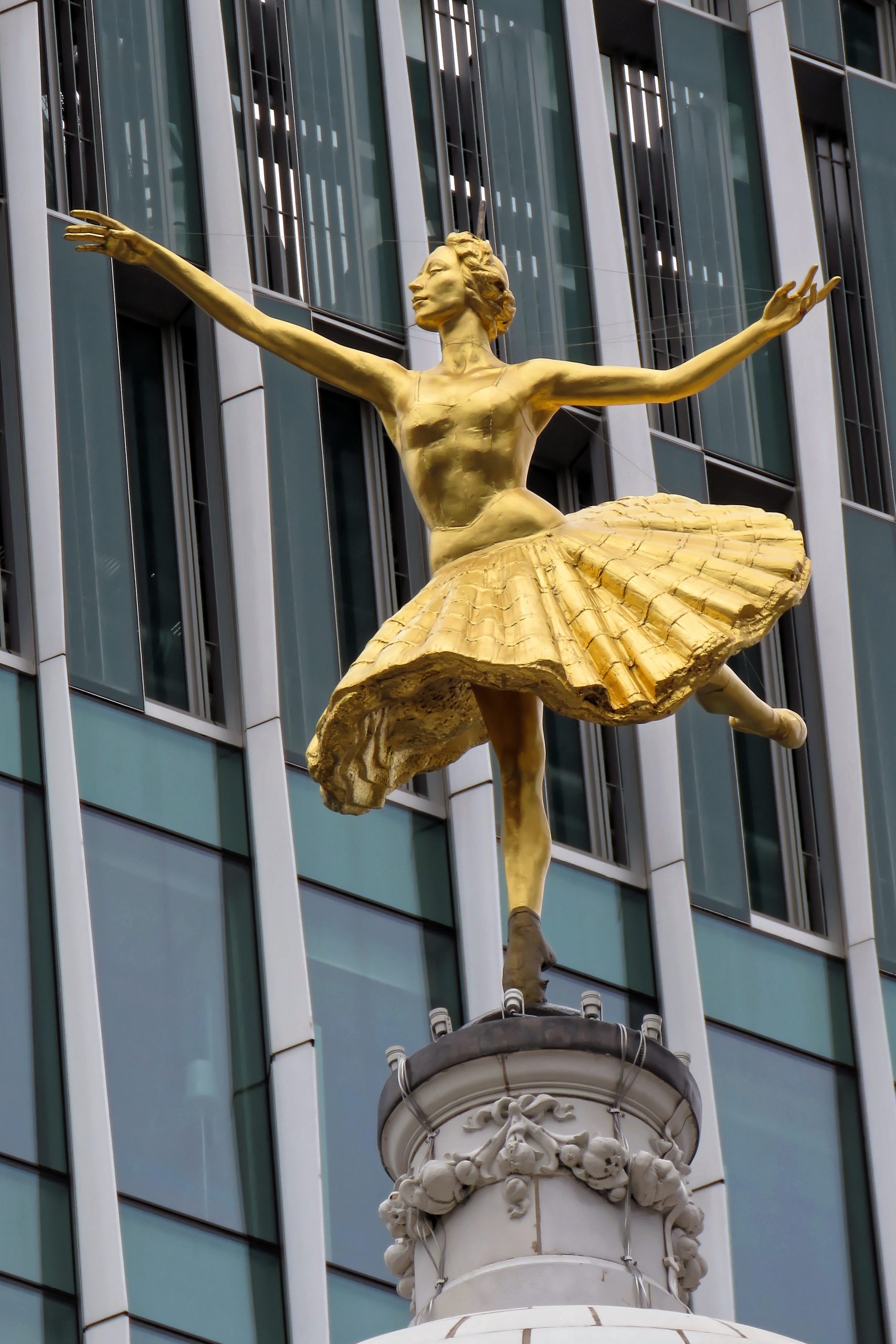 Anna Pavlova (1881-1931) was a celebrated Russian prima ballerina and the principal artist of the Imperial Russian Ballet. Her signature role was The Dying Swan, which she performed thousands of times. Her statue on top of the cupola of the Victoria Palace Theatre was commissioned by the owner Sir Alfred Butt (1878-1962), possibly to the design of architect Frank Matcham (1854-1920). Pavlova appeared on stage there, when the theatre first opened in 1911. The original statue was taken down during WWII and lost. The present gilded bronze figure is a replica based on photographs of the original. It was erected in June 2006. 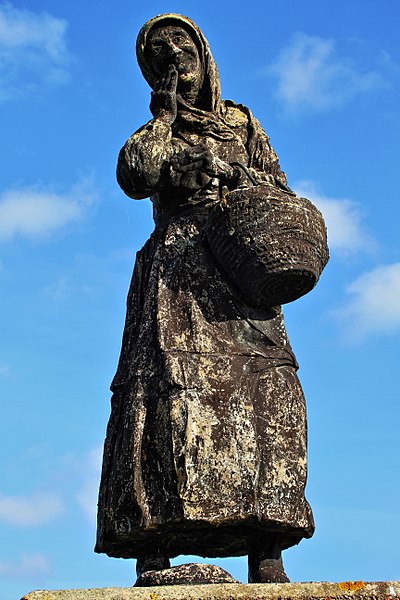 Dolly Peel (1782-1857) was a South Shields fishwife and smuggler in the 1800s, who protected sailors from the press gangs. Her activities were discovered, but she was pardoned and given work nursing sick sailors. She became a local heroine and later published poetry. The statue was commissioned by her great-great-great grandson Reginald Peel and was based on a surviving photograph.  Made of ciment fondu, the statue was unveiled in April 1987 by Councillor Gladys Hobson. 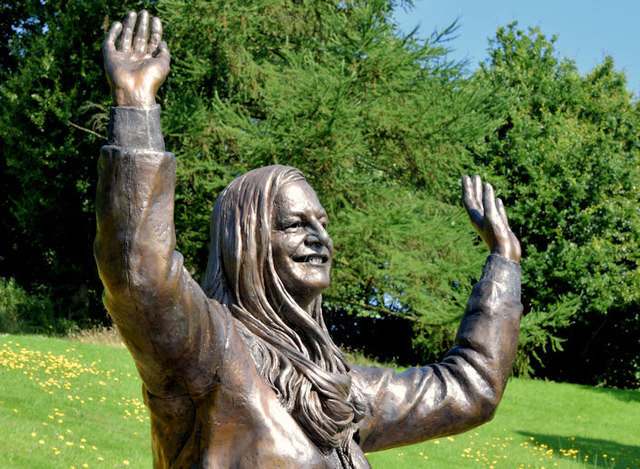 Lady Mary Peters (b. 1945) was a pentathlete and shot putter, who represented Northern Ireland at every Commonwealth Games 1958-74, winning two gold medals for the pentathlon and a silver for the shot put. In 1972 she was awarded  BBC Sports Personality of the Year, having won Britain’s only athletics gold medal at the Munich Olympics. Her bronze statue, erected at the athletics track which was created in her name, shows Peters giving her characteristic victory wave to the crowd. It was unveiled in June 2013. 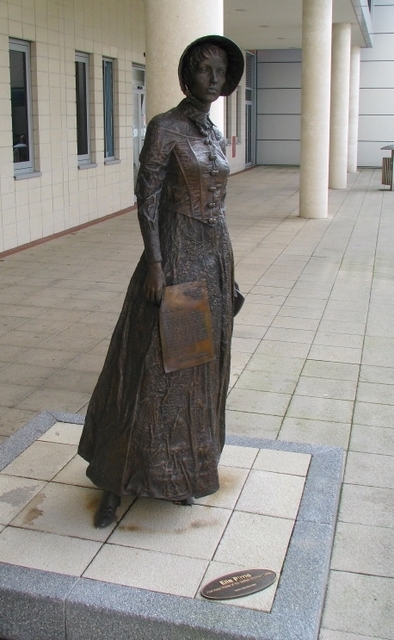 Isabelle ‘Ella’ Pirrie DCS (1857-1929) having trained with Florence Nightingale, in 1883 Pirrie became the first nurse in the Belfast Union Workhouse (now Belfast City Hospital), where she established a nursing school. She later became matron of the Deaconess Hospital in Edinburgh (1894-1914), a training school for nurses. The bronze statue shows her holding a letter from Florence Nightingale dated 1 October 1885, which reads ‘…You have already done great things. You must be the nucleus of hope for a goodly future of trained nursing staff at Belfast Infirmary …’. The statue was erected in 2007. 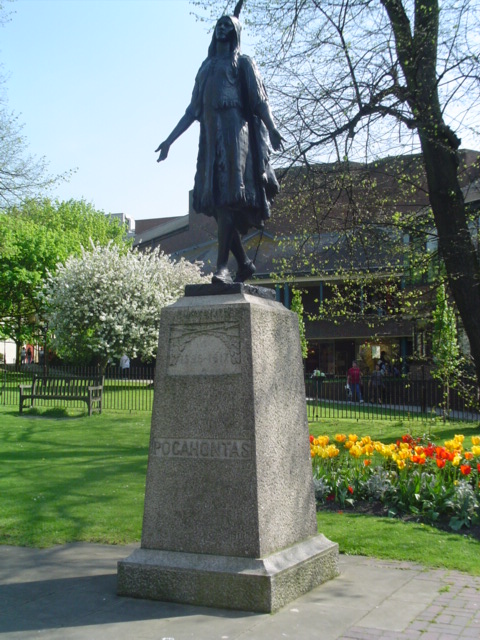 Princess Pocahontas (c.1596-1617) was a Native American, associated with the colonial settlement at Jamestown, Virginia. She married tobacco planter, Jon Rolfe. They visited England, where she became a celebrity, but died at Gravesend on the return journey. This bronze statue, cast from the original by William Ordways Partridge of 1922 in Jamestown, was presented to the British people by the Governor of Virginia and unveiled in 1958. It is listed Grade II. 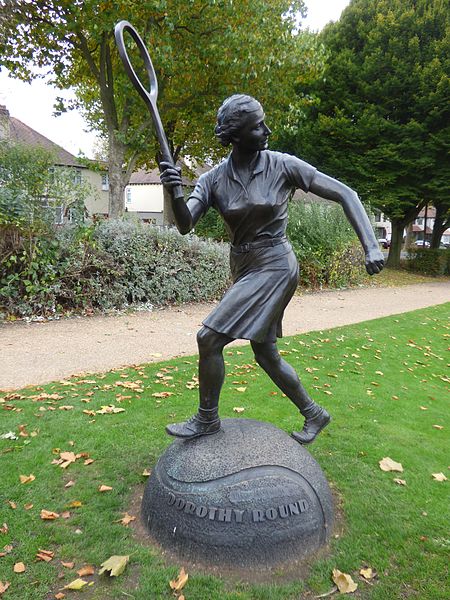 Dorothy Round (1909-1982) (known as Mrs D.L. Little after her marriage) was a champion tennis player, winning the singles title at Wimbledon in 1934 (when she was ranked no.1 in the world) and in 1937. She also won the Australian singles in 1935 and three mixed doubles titles at Wimbledon. Her life-size bronze statue, unveiled by her daughter on 20 September 2013, is in her home town. 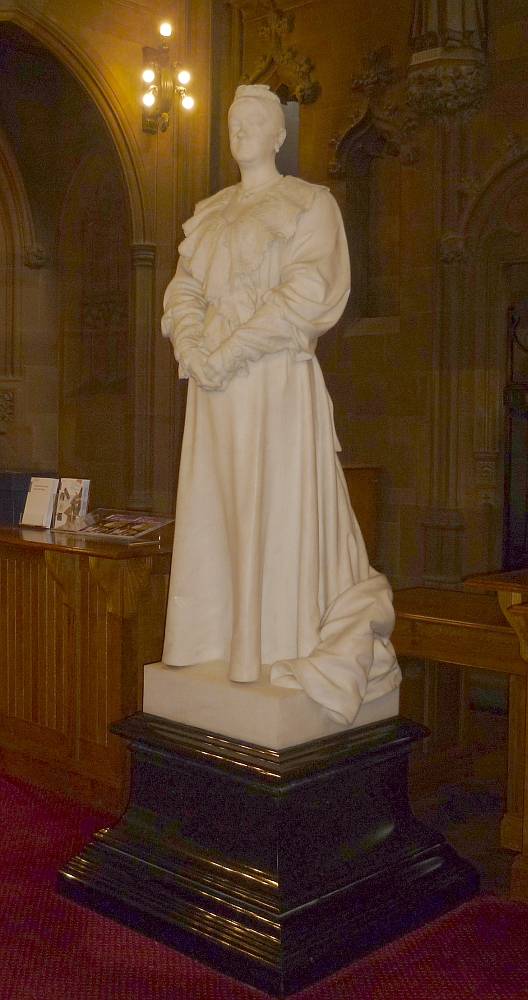 Enriqueta Augustina Rylands (1843-1908), a philanthropist, was the third wife of the wealthy cotton manufacturer, John Rylands. After his death, she spent 20 years and around two million pounds of his fortune building the John Rylands Library in his memory. She loved architecture, art and books. The Library was designed at her request by the architect, Basil Champney (1842-1935). It rivalled the university libraries of Oxford and Cambridge. When it was inaugurated on 6 October 1899, the anniversary of her marriage, the Manchester Corporation gave her the Freedom of the City. She was the first woman to receive this honour. Mrs Rylands commissioned a Seravezza marble statue of her husband for the Reading Room from the sculptor, John Cassidy in 1894, which was installed when the Library opened. Supporters of the Library commissioned her statue from the same sculptor, also in Seravezza marble, as a pair to her husband’s. This stands at the other end of the Library facing him and was unveiled on 9 December 1907, shortly before her death.

Enriqueta Augustina Rylands (1843-1908), a philanthropist, was the third wife of the wealthy cotton manufacturer, John Rylands. After his death, she spent 20 years and around two million pounds of his fortune building the John Rylands Library in his memory. For further details see previous entry. This bronze statuette (h.95cm.) was commissioned by the supporters of the Library. Signed and dated 1905 by the sculptor, John Cassidy, this cast is a reduction of the larger statue. Previously displayed on the fourth floor of the Library, this bronze is now exhibited in the Library foyer. 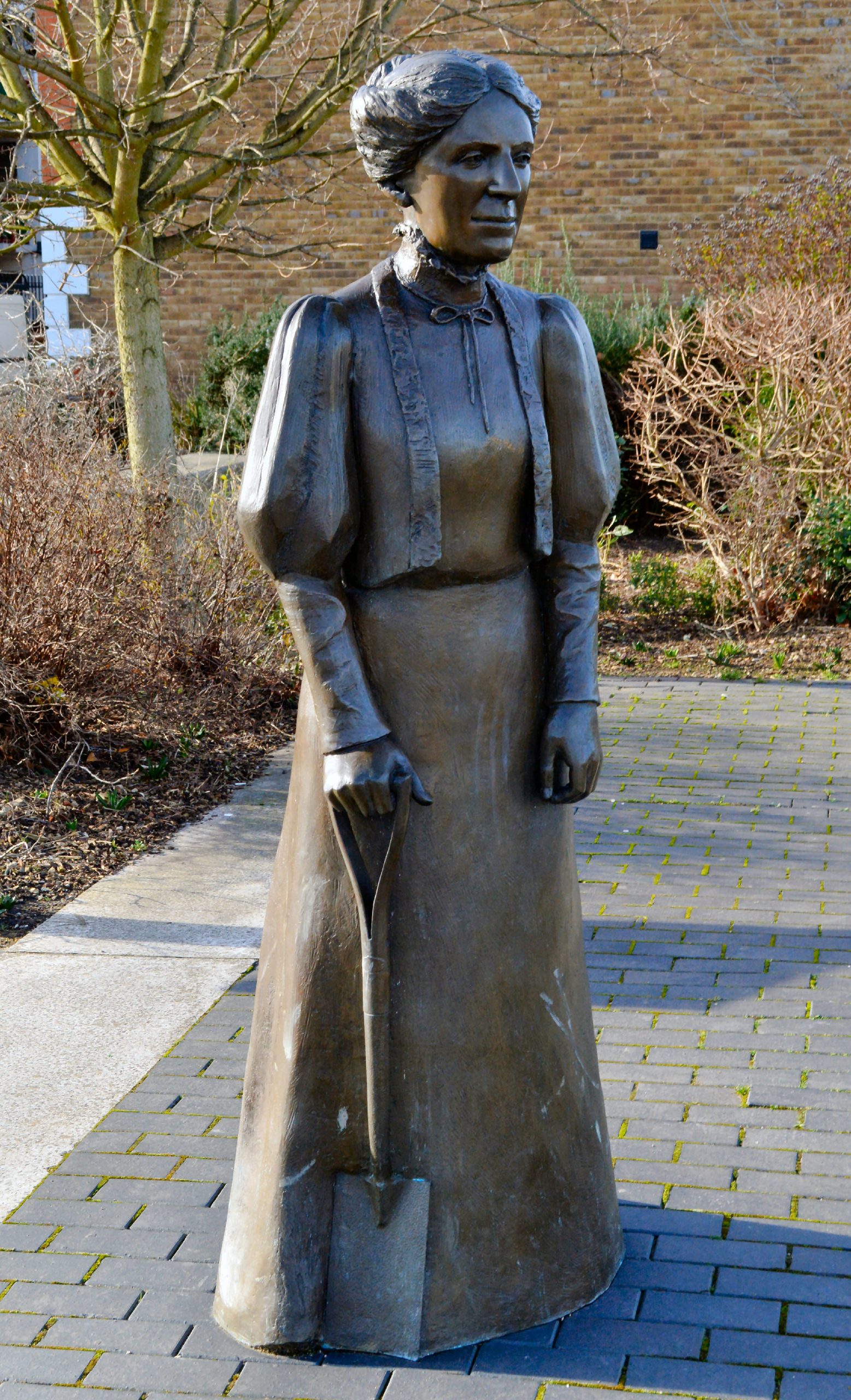 Ada Salter (1866-1942) was a social reformer, pacifist and environmentalist.  She was President of the Women’s Labour League and President of the National Gardens Guild. She was one of the first women councillors in London, first woman mayor in London, and first Labour woman mayor in the British Isles. Her statue which forms part of a sculptural bronze group, Dr. Salter’s Daydream,  comprising the whole Salter family was unveiled on 30 November 2014. It replaced a previous group, of the same title also by Gorvin made for London Docklands in 1991. The statue of Dr. Salter, which was stolen from the earlier group in 2011, did not include a statue of Ada, but she is present in the new sculpture. This represents Alfred Salter in his old age sitting imagining happier times watching his wife, Ada, his daughter Joyce, who died at the age of eight and her cat. This replacement sculpture was erected by the Salter Campaign Group and Southwark Council. 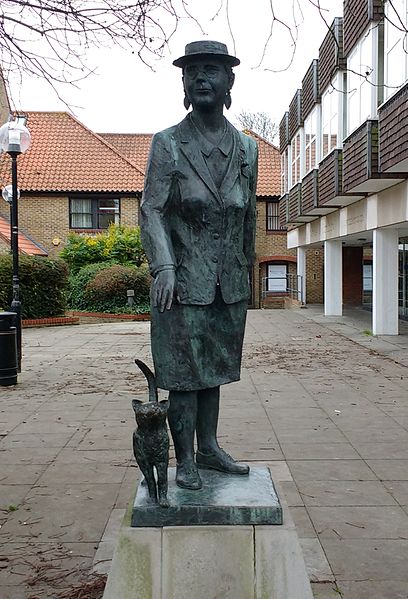 Dorothy L. Sayers (1893-1957) was a crime writer, poet, essayist, literary critic, linguist and a Christian humanist. She is known for her creation of the fictional amateur sleuth, Peter Wimsey. She was fond of cats and the bronze statue, set on a low stone plinth, shows her accompanied by her cat, Blitz. Sayers lived for many years in Witham and the statue is sited opposite her house and the Library. It was unveiled in 1994.