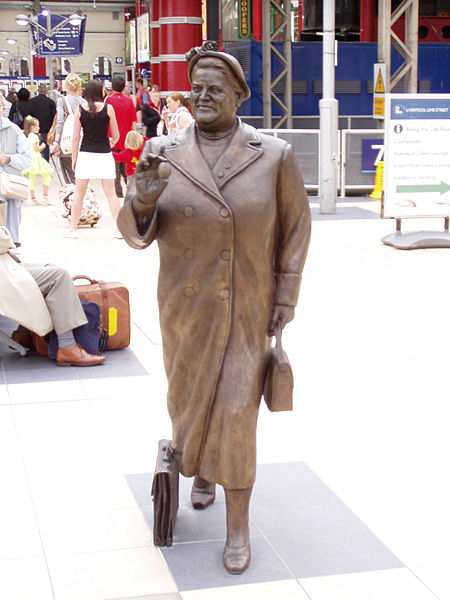 Bessie Braddock (1899-1970) was a member of Liverpool Borough Council 1930-61, British Labour Party politician and MP for Liverpool Exchange 1945-70. She campaigned on social issues, housing and public health. Known among her constituents as ‘Battling Bessie’, her oratory was colourful. Her statue in bronze is part of an ensemble with a further bronze statue of the Liverpool comedian Ken Dodd, whom she appears to meet. The sculpture entitled Chance Meeting was commissioned by Merseytravel and unveiled in June 2009. 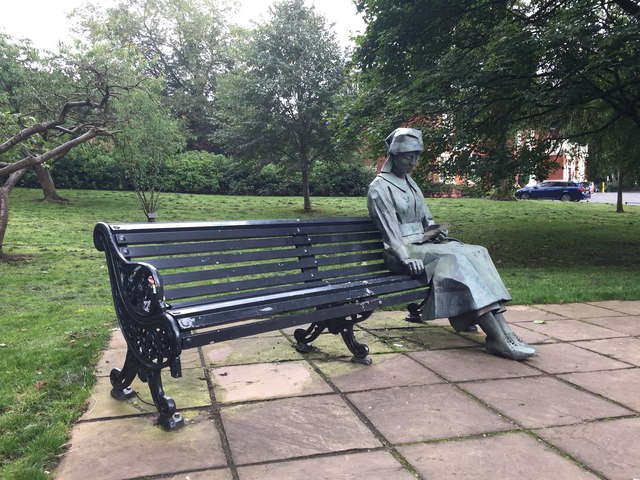 Vera Brittain (1893-1970) was a feminist and socialist. In WWI she was an English Voluntary Aid Detachment (VAD) nurse, her wartime experiences and subsequent pacifism are recounted in her moving memoir Testament of Youth (1933). Mother of the politician, Baroness Shirley Williams, Vera Brittain was born at Newcastle-under-Lyme, where this sculpture is located. Entitled The Lady in the Park, it was commissioned by Newcastle-under-Lyme Borough Council and funded by the charity Realise to mark the WWI centenary. Made from a mixture of recycled metal and 200 pieces of sheet steel, it was then treated to resemble bronze. The statue was unveiled in November 2014. 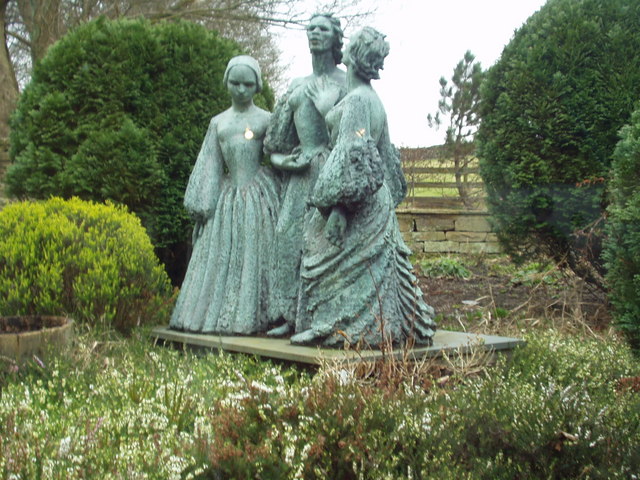 The Bronte sisters, this bronze group represents the three sisters, Charlotte (1816-1855), Emily (1818-1848) and Anne (1820-1849), who were all novelists and poets. They first published under the androgenous pseudonyms of Currer, Ellis and Acton Bell, because the prejudices of the time would have disapproved of the publication of their works had they been known to be women.  Once they achieved success they admitted to the pseudonyms. In this sculture the sisters are shown walking together and now appear to do so in the garden at the Haworth Parsonage, where they lived together with their father, who was perpetual curate of the parish. Commissioned in 1950, the sculpture is dated the following year. It was previously housed at Leeds City Art Gallery. 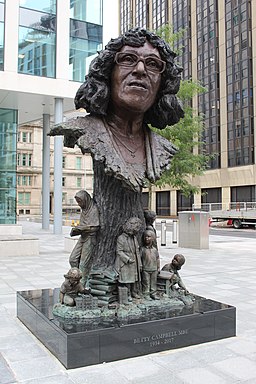 Betty Campbell MBE (1934-2017) was born to a Barbadian mother and Jamacian father in Butetown, the Cardiff docklands (Tiger Bay). After gaining a scholarship to high school, she trained as a teacher and for 28 years taught at Mount Stuart Primary School, Butetown, where she became the first black headteacher in Wales. Inspired by Harriet Taubman on a trip to the US, Campbell became a campaigner for the teaching of black history, helping establish Black History Month. She was a county councillor for Butetown ward, sat on the Race Relations Board 1972-76, and served as a member both of the Home Office’s race advisory committee and the Commission for Racial Equality. Campbell was chosen by public vote as the subject of Cardiff’s first outdoor public statue of a named non-fictional woman, which is also thought to be the first in Wales. This huge bronze memorial was unveiled on 29 September 2021. Campbell’s head is placed atop a tree of life surrounded by ten children and items from the schoolroom. 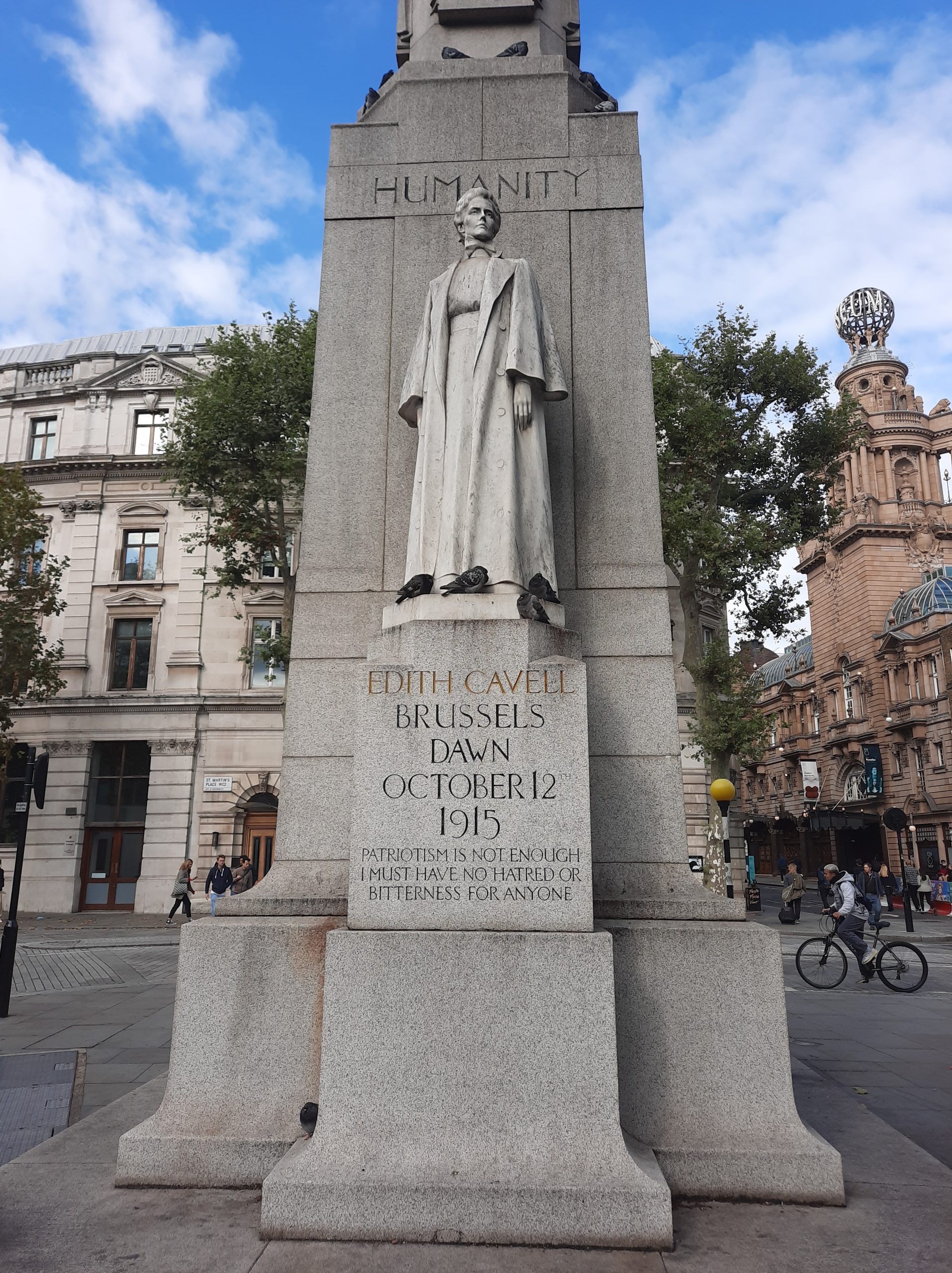 Memorial to Edith  Cavell  (1865-1915) was a WWI nurse, arrested by the German authorities in Belgium in August 1915 for helping French and British soldiers and civilians, she was tried and shot on 12 October 1915 . Her white marble statue stands on a Cornish grey granite pedestal against a pylon, topped with a statue of a mother and child and cross, all of granite. The memorial was unveiled on 17 March 1920. Listed Grade I. For full description and discussion see Philip Ward-Jackson, Public Sculpture of Historic Westminster, vol. 1, LUP 2011, pp. 245-48. 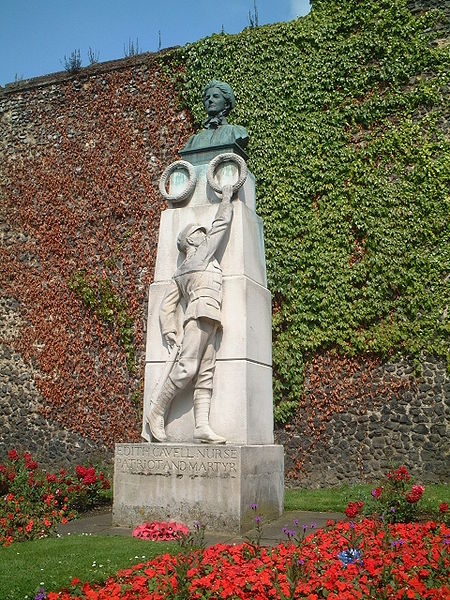 Location: Grounds of Norwich Cathedral, Norwich, Norfolk. (Moved to current location 1993) from where? 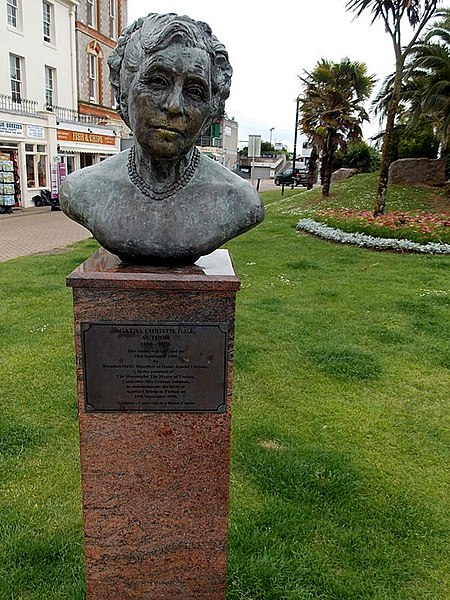 Dame Agatha Christie, DBE (1890-1976) was the author of short stories and 66 detective novels, featuring her two sleuths Hercule Poirot and Miss Marple. Also a playwright, she was responsible for the world’s longest running play The Mousetrap.  Christie was born in Torquay and her portrait bust by the Dutch sculptor, Carol Van Den Boom-Cairns, which is a unique bronze cast, was commissioned to be placed there to celebrate her centenary. It stands on the Torquay seafront on the ‘Agatha Christie Mile’ and is placed where her first husband proposed. It was unveiled in 1990 by her daughter. 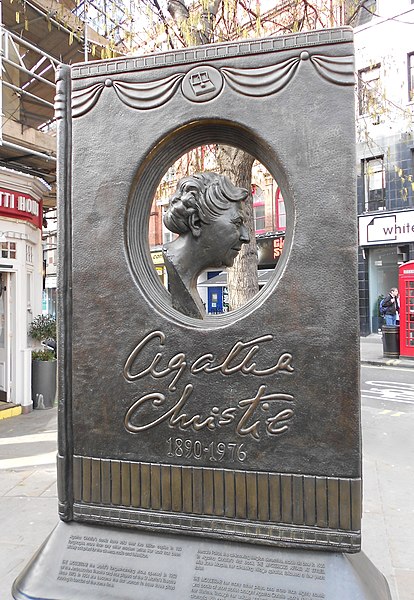 Dame Agatha Christie, DBE (1890-1976) was the author of short stories and 66 detective novels, featuring her two sleuths Hercule Poirot and Miss Marple. Also a playwright, she was responsible for the world’s longest running play The Mousetrap. This memorial commemorates her contribution to the theatre, the only female playwright to have three West End plays running at the same time. It was unveiled on 25 November 2012 to commemorate the 60th anniversary of The Mousetrap. The bronze is a large relief sculpture of a book with the titles of some of her works and a portrait bust of Christie in the centre, lit from inside and beneath. The idea for the memorial came from Christie’s grandson and was implemented together with Sir Stephen Waley-Cohen, current producer of The Mousetrap. 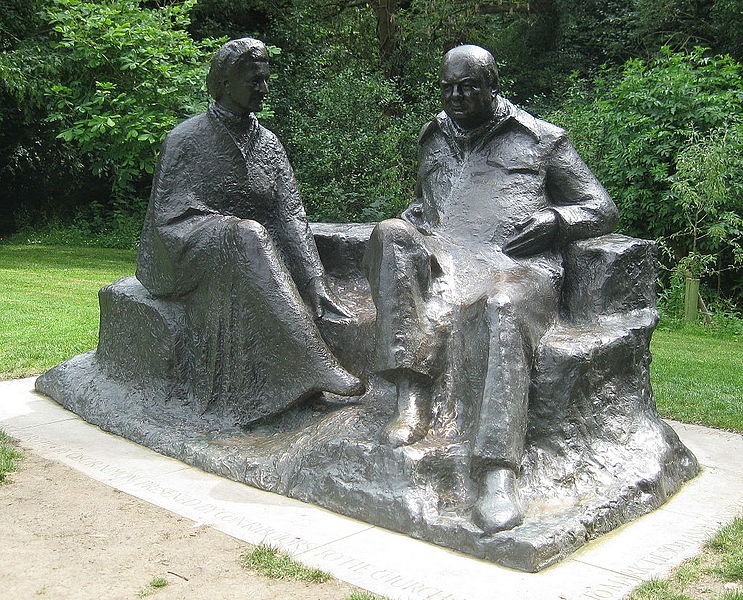 Clementine Churchill, Baroness Spencer-Churchill GBE(1885-1977), the wife of Sir Winston Churchill (1874-1965) was a life peer in her own right. Their marriage was close in spite of the stress of politics. The sculptor of this work, Oscar Nemon, is known for his series of sculptures of Sir Winston and both the Churchills admired his talent for portraiture. The wording around its base records that it was ‘Presented by Contributors to the Churchill Statue Fund to mark the 50th Anniversary of his becoming Prime Minister in 1940 and the 25th Anniversary of his death. Unveiled by Her Majesty Queen Elizabeth the Queen Mother, President of The National Trust, on 13 November 1990.’ 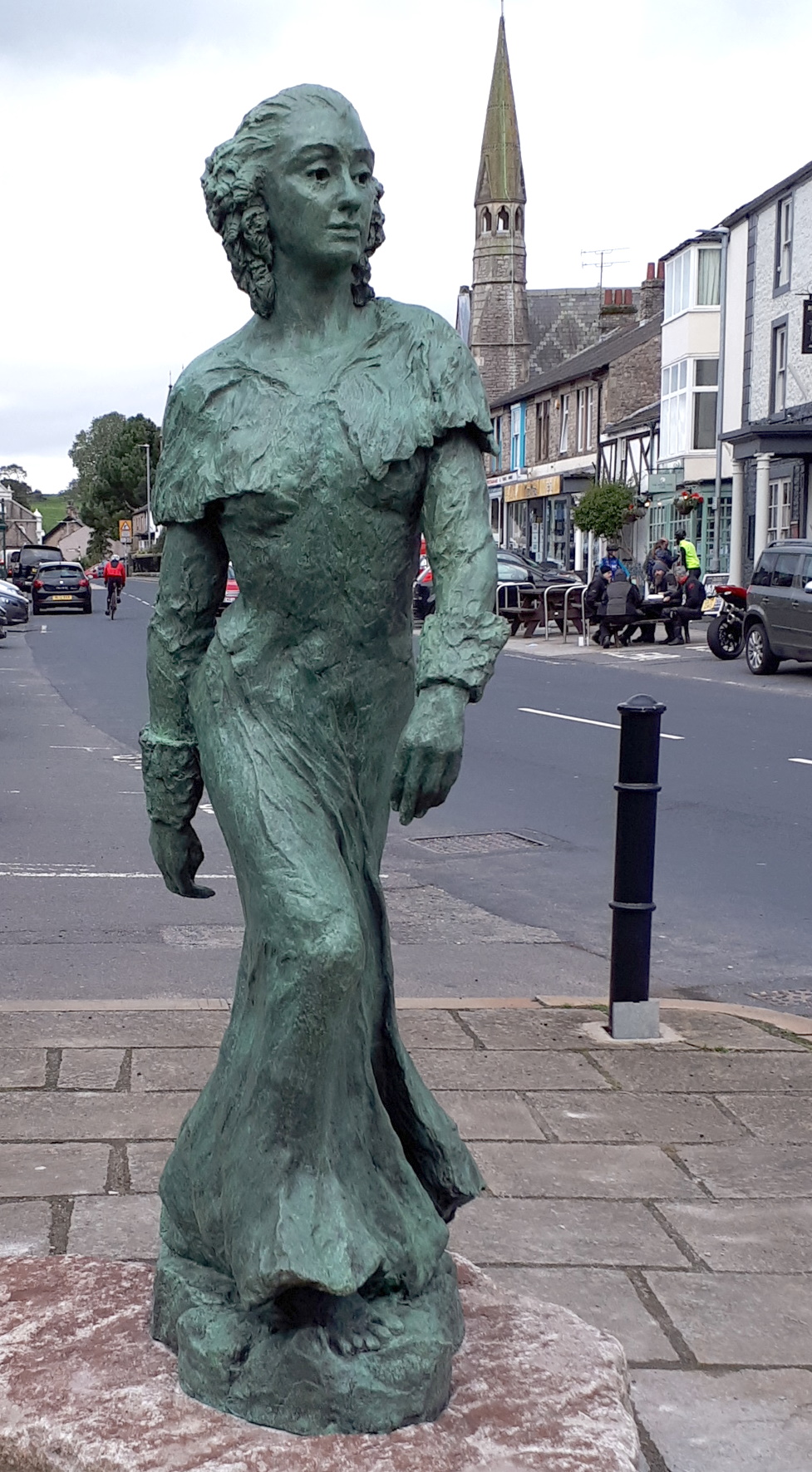 Lady Anne Clifford, Countess of Dorset, Pembroke and Montgomery, suo jure 14th Baroness de Clifford (1590–1676), the last member of an important medieval dynasty, she fought for 40 years to inherit her father’s estates. She was responsible for the restoration of a series of castles from Skipton to Brougham, near Penrith. A patron of literature, she provided schools, churches and alms houses. The sculpture entitled Lady Anne’s Way shows her walking along with characteristic energy, it is sited on the route of the long distance path of the same name through old Westmorland and Yorkshire. Rooted in history, the sculptor feels the statue is significant for local people, who are concerned about their loss of identity. Many Kirkby Stephen inhabitants descend from ancient Westmorland families, who have lived in the area for generations. The bronze statue was unveiled on 24 September 2020.