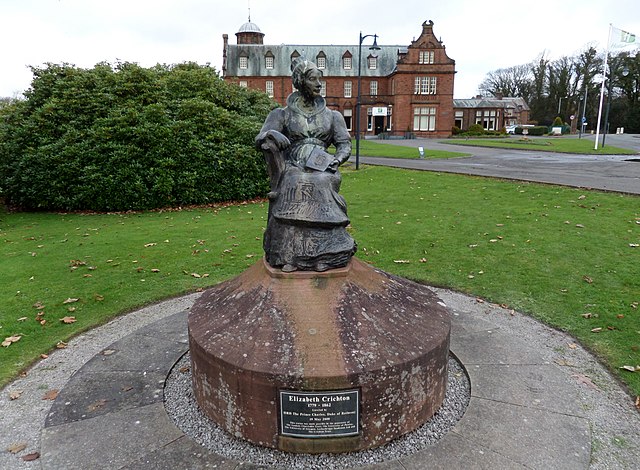 Elizabeth Crichton (1779-1862) was a philanthropist, who founded the Crichton Royal Hospital in Dumfries. She had wanted to open a university, but was unable to obtain permission and instead founded a mental hospital, which delivered treatment that was very advanced for the time. Ironically, today the hospital estate is a university campus. This bronze memorial statue standing on a stone disc, which the sculptor, Bill Scott based on a painting of 1870, was unveiled in May 2000.

Jackie Crookstone (1768-1797) is depicted here in a public sculpture entitled The Tranent Massacre Memorial. She was an activist associated with the riots which led to this massacre and she was one of its victims. Her bronze statue was unveiled in 1995. The figure of the boy was added later for stability. 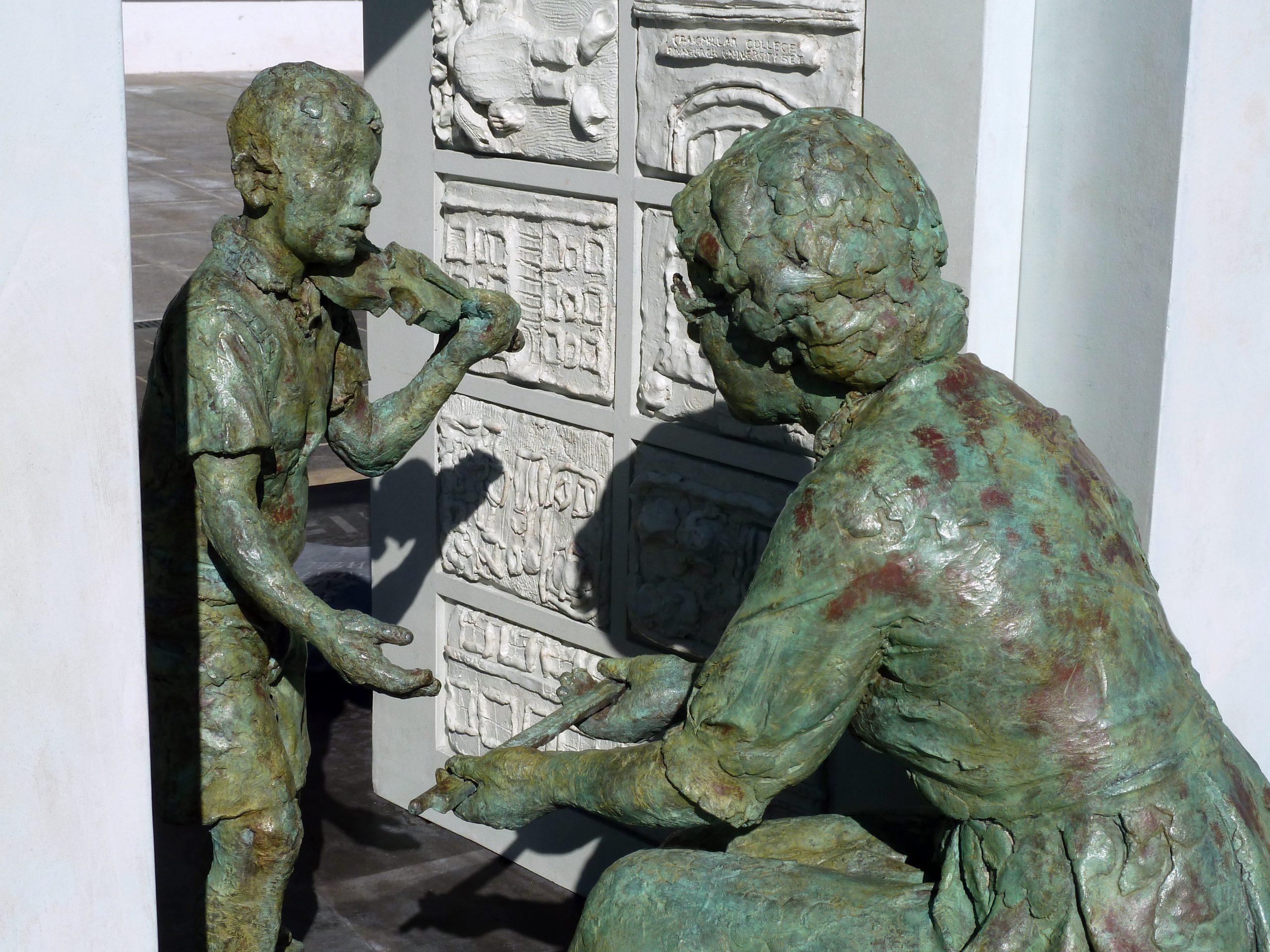 Dr Helen Crummy (1920-2011) was a social activist, writer and the founder of the Craigmillar Festival Society in 1962. The bronze statues of Crummy and her son (2013-14) are mounted on a concrete base with a Jesmonite doorframe, the sculpture was unveiled on 21 March 2014. For full description and discussion see Ray McKenzie, Public Sculpture of Edinburgh, vol.1, LUP 2018, pp. 310-12. 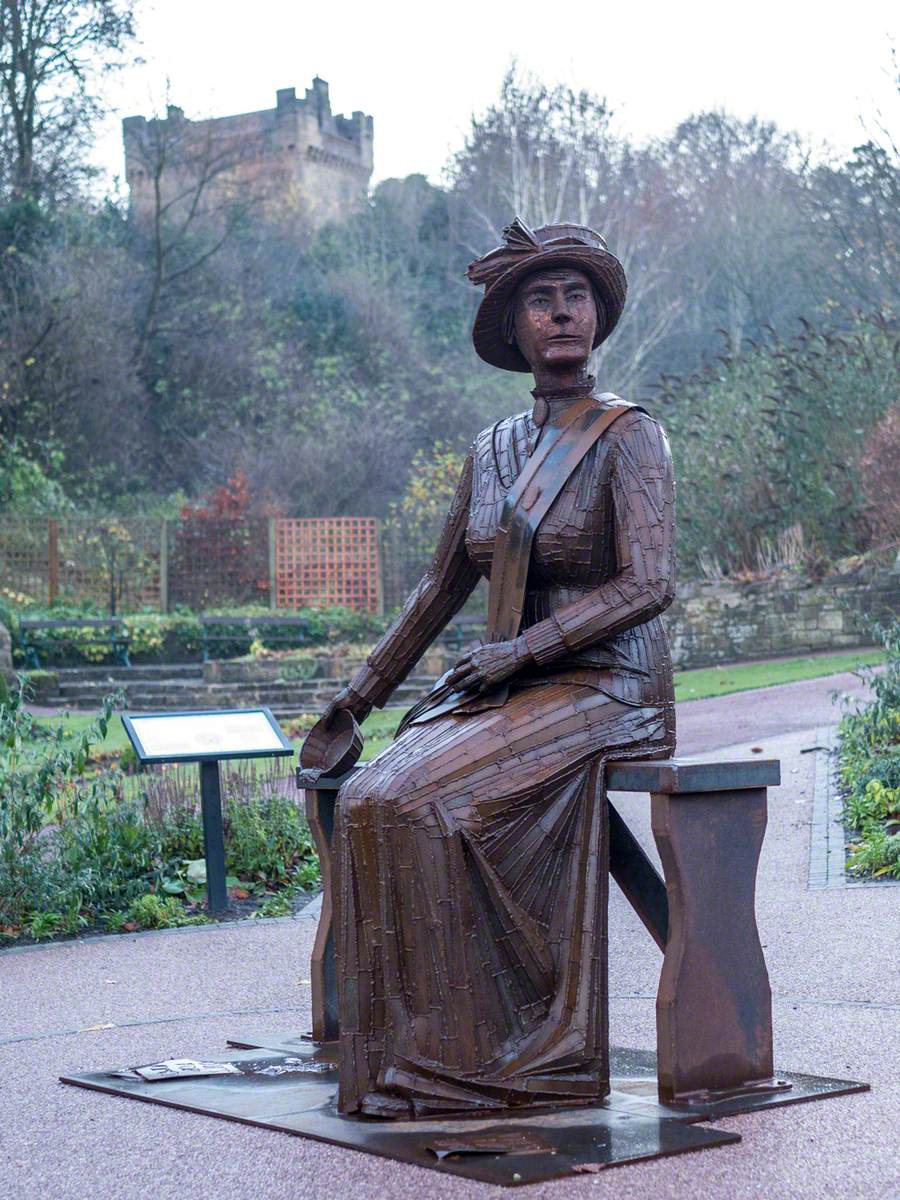 Emily Wilding Davison (1872-1913), the militant suffragette, who was knocked over by King George V’s horse, when she ran on to the racecourse at the 1913 Epsom Derby and later died from her injuries. This steel statue depicts Davison on hunger strike in prison emptying the food from her bowl. The steel scrolls are inscribed: VOTES / FOR / WOMEN; and: SHE KNEW. / KNEW THEY WOULD COME / WITH A FUNNEL AND PIPE / THAT THEY WOULD COME / MOB HANDED. / RESTRAINING HER BODY BUT / STRENGTHENING HER / CONVICTION. / THEIR MISGUIDED METHODS. / SMALL BRUTAL VICTORIES / ACHIEVING THEIR GREATER / DEFEAT. / AND SHE WAS CONTENT. Davison’s parents both came from Morpeth and she is buried in the family plot there in the churchyard of St Mary the Virgin. The statue was commissioned by Northumberland County Council and Morpeth Town Council and was unveiled on 11 September 2018. 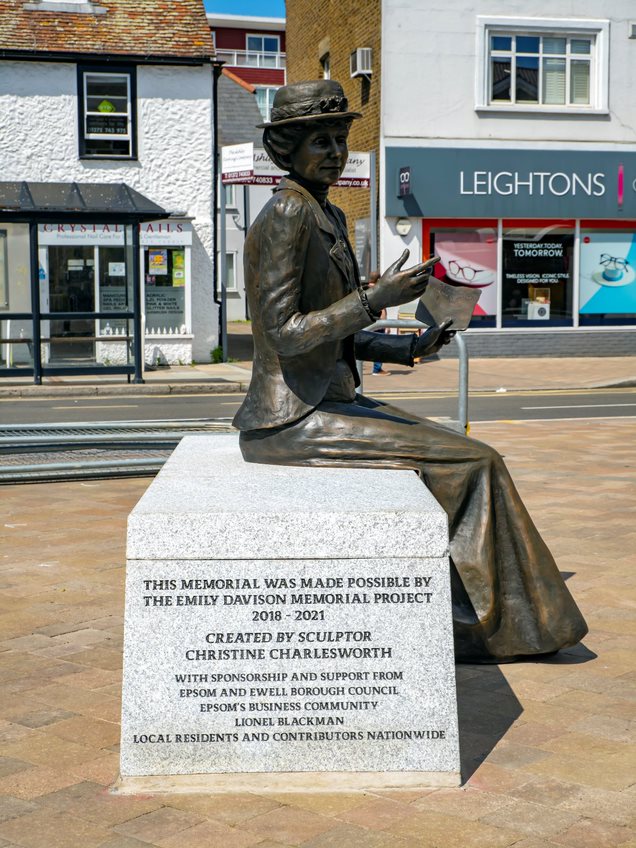 Emily Wilding Davison (1872 – 1913) The militant suffragette, sits on a pale granite bench. She is depicted in the hat she wore when she was knocked down by the King George V’s horse, and later died, after running on to the racecourse at the 1913 Epsom Derby. Beside her on the bench are three of her favourite books and her mortarboard, which she always wore when marching with the suffragettes. She wears her hunger strike medal with seven bands to indicate the number of times she was imprisoned. She also wears her Royal Holloway and her suffragette badges. She is turned towards whoever sits down beside her on the bench as if she is in conversation, with her one hand ready to be held and her other hand holding the census form for the Palace of Westminster that was completed by the clerk to include her name after she had spent the night hiding there to avoid being added to it. The statue was unveiled on 8 June 2021, the anniversary of the day she died. 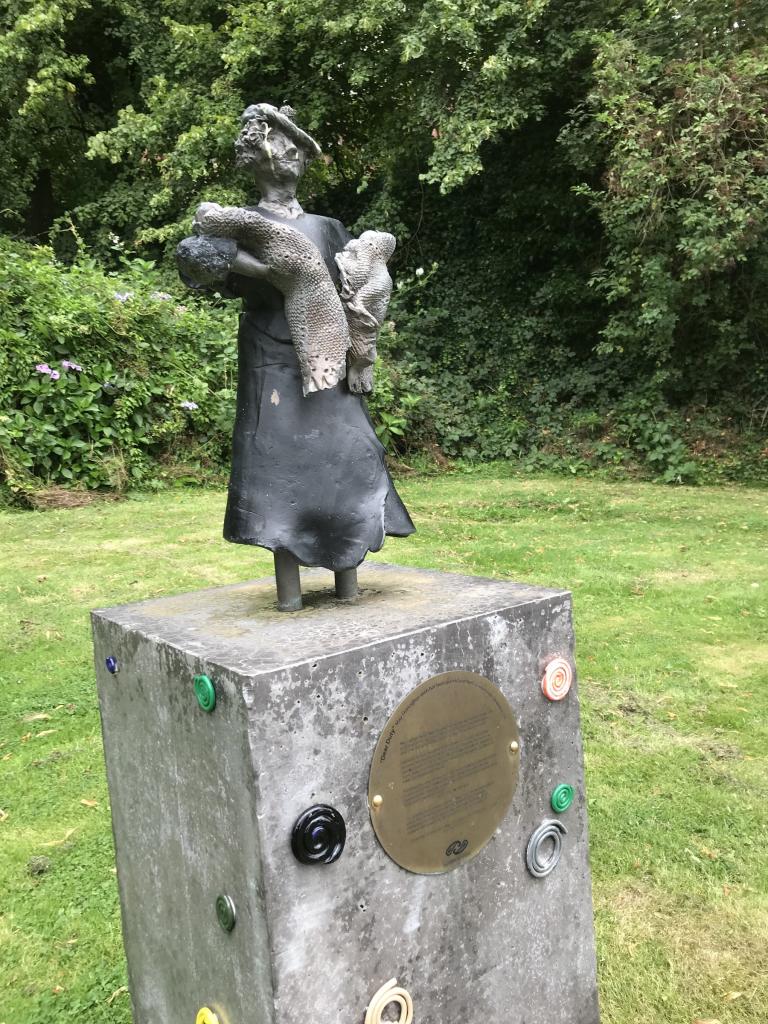 May Donoghue (1898-1958) found a decomposed mollusc in her ginger beer, which made her ill and she was diagnosed with gastroenteritis, as a result she sued the manufacturer, Stevenson, and the case was settled out of court in 1932. The internationally renowned legal case ‘Donoghue v Stevenson’ lay the foundation for the modern law on negligence and became known as ‘the snail in the bottle’ case. The bronze statue entitled ‘Dear Duty’ depicts Donoghue holding her twin granddaughters on their christening day, which the sculptor intended to symbolise the scales of justice. The statue, which is sited close to the café where Donoghue found the snail in her drink, stands on a plinth decorated with hand-coloured bronze spirals which represent the snail. The memorial was erected in September 2018. 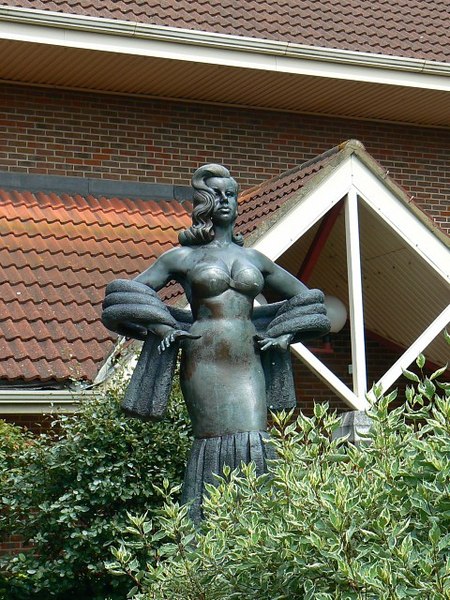 Diana Dors, born Diana Mary Fluck (1931-1984), film and television actress and singer. This bronze statue was unveiled in 1991. Dors was born in Old Town, Swindon and spent her early childhood there. 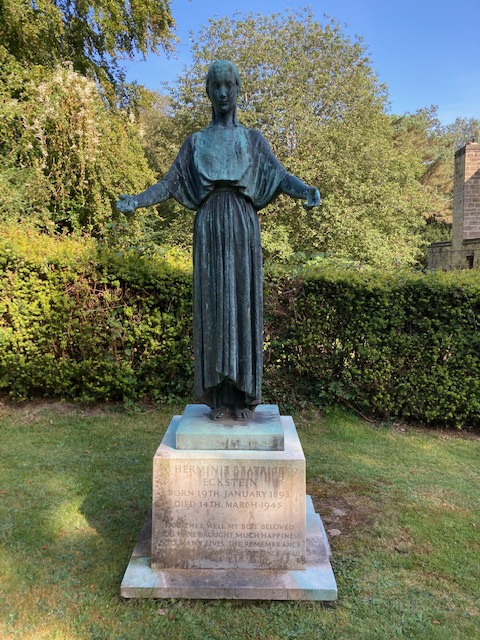 Herminie Beatrice Eckstein (1893-1945) was the unmarried sister of Sir Bernard Eckstein, a major art collector, who had business interests in the Sudan. They lived together at Oaklands Hall, Fairwarp. On her death, Bernard commissioned this monument at the local churchyard at Christ Church, where Herminie had laid the foundation stone for the enlargement of the church. She was a friend of Agnes Baden-Powell (sister of Robert, founder of the Boy Scouts), the first President of the Girl Guides. In 1934 Herminie donated the site of Cherry Green Trees near Hatfield to the North Middlesex Division of the Guides. This bronze portrait statue, depicting her in classical Greek dress, is signed ‘Reid Dick’ and dated 1930, indicating either that it had been chosen for her monument prior to her death or that it was a statue of his sister of which Bernard was particularly fond. The stone pedestal is inscribed: HERMINIE BEATRICE ECKSTEIN BORN 19TH. JANUARY 1893 DIED 14TH. MARCH 1945 FARE THEE WELL MY BEST BELOVED YOU HAVE BROUGHT MUCH HAPPINESS INTO MANY LIVES. THE REMEMBRANCE OF YOU WILL ALWAYS BE WONDERFUL. The Eckstein coat of arms are carved on the back of the pedestal. 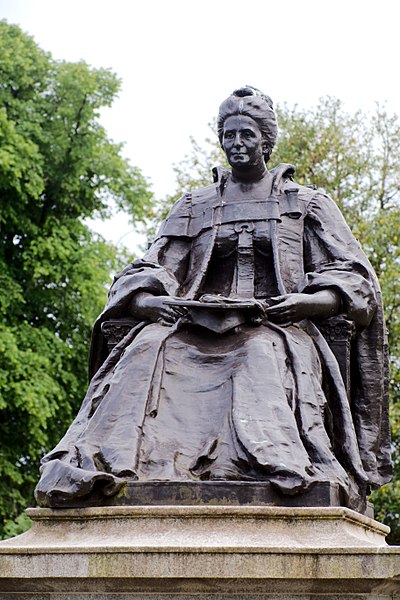 Isabella Elder (1828-1905) was a benefactress and philanthropist, who promoted education, especially among women and was concerned with the welfare of the people of Govan. She built the Elder Free Library, a School of Domestic Economy, the Cottage Hospital and a Nurses’ Training Home. She created Elder Park, where this statue is sited. The bronze statue shows her in academic robes on a granite plinth. The statue, unveiled on 13 October 1906, was erected by public subscription. It is very rare to find a statue to a non-royal woman at this period. 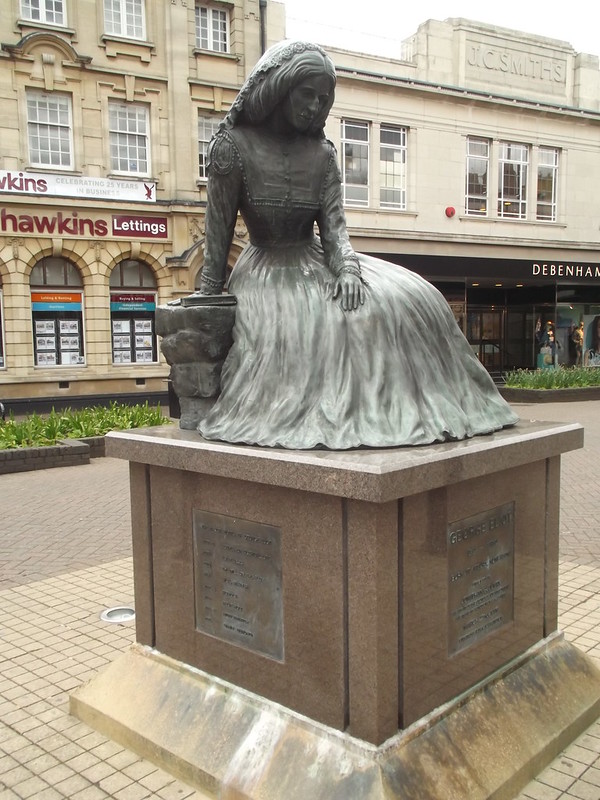 George Eliot (1819-1880) was the pseudonym adopted by Mary Ann Evans in order for her writing to be taken seriously and published at a time when the idea of a female author would have met with disapproval. She is a renowned novelist, her works which reflect provincial life in the Victorian era are perceptive in characterisation, displaying sharp psychological insight. She wrote several novels Middlemarch, Silas Marner and Mill on the Floss being perhaps among the best known.  She was also an essayist, journalist and poet. Eliot was born at Arbury which is near Nuneaton. This bronze statue was commissioned by the George Eliot Fellowship and unveiled on 22 March 1986. There is a second later cast of 1996 outside the George Eliot Hospital, Nuneaton, Warwickshire.