Award for Excellence in Public Sculpture

A Vote for Women! Hazel Reeves’ Our Emmeline, Rise Up, Women won the 2021 Marsh Award for Excellence in Public Sculpture with her inspiring statue of suffragette Emmeline Pankhurst. The statue which stands in St Peter’s Square in Manchester depicts Emmeline Pankhurst (1858-1928), who campaigned tirelessly for votes for women throughout her life and organised the suffragettes’ militant campaigns. She died shortly after women were granted equal voting rights with men

In her acceptance speech on receiving this prestigious award, Hazel Reeves said that she was ‘absolutely thrilled that a statue of a woman, sculpted by a woman, has received such an accolade.’ She said that it was a privilege to tell the story of this extraordinary activist, Emmeline Pankhurst in bronze and added ‘I dedicate this award and the prize money to our modern-day Emmelines, who work tirelessly to challenge inequality and violence, because in their hearts they know that change is possible.’

The judging panel were impressed by the originality of the design of the sculpture in the way that Hazel Reeves had used a domestic chair in the place of the traditional, ubiquitous plinth. Emmeline’s foot on the edge of the chair can be seen as representing both her and her campaign’s precarity.

The sculpture stands within a ‘meeting circle’ which the figurative sculptor also designed; this creates a practical piece of urban infrastructure providing seating for visitors or a platform for soapbox speakers.

‘Our Emmeline’ was unveiled on 14 December 2018 to commemorate the 100 years since women in the UK first voted in a general election. The statue had a marked impact on the local community when it was unveiled and has continued to attract a great deal of public engagement. 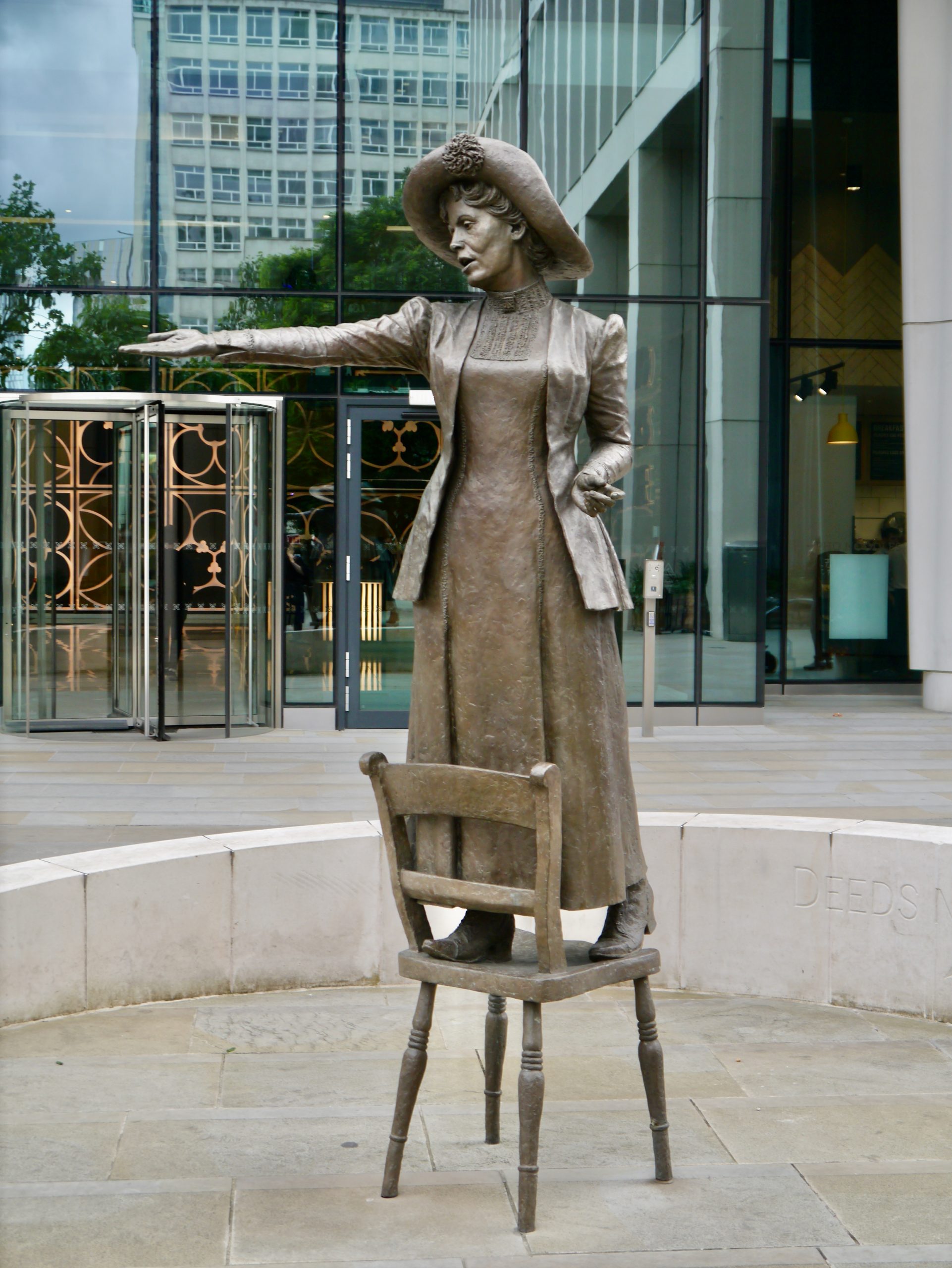 Award for Excellence in Fountains and Water Features

Mark Wallinger and Studio Octopi received the PSSA’s 2021 Marsh Award for Excellence In Fountains and Water Features for Writ in Water. Mark Wallinger said ‘We are absolutely delighted to have won this award. It was a tremendous thrill to be the first major contemporary commission for the National Trust. Believing that something new can bring the past to life. This award recognises that belief and all the hard work so many people gave in realising Writ in Water.’

Writ in Water was inspired by Clause 39 of Magna Carta and the fundamental principles of justice it embodies.
‘No free man shall be seized or imprisoned, or stripped of his rights or possessions, or outlawed or exiled, or deprived of his standing in any way, nor will we proceed with force against him, or send others to do so, except by the lawful judgment of his equals or by the law of the land.’ 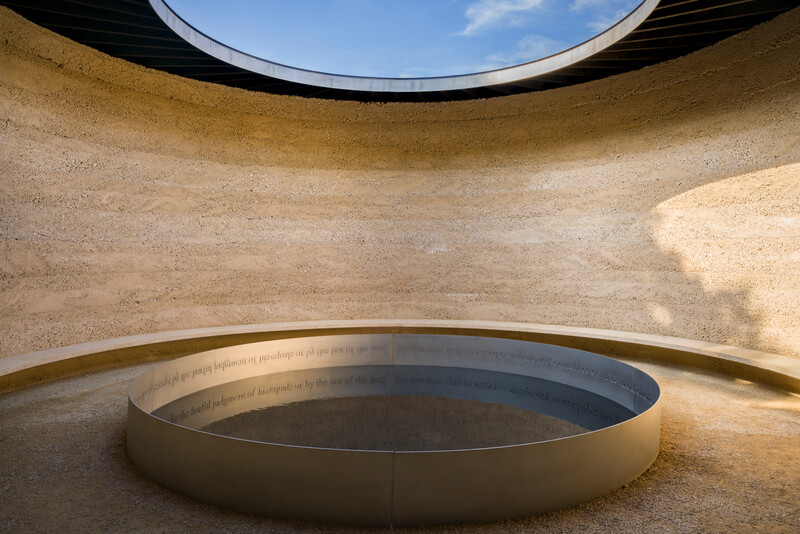 The site at Runnymede and the words of John Keats’ epitaph gave Writ in Water its title. Conceived as a gathering space at the heart of this ancient landscape, Writ in Water reflects upon the founding principles of democracy through a meeting of water, earth, sky and light,creating an immersive space for reflection and contemplation.

The PSSA’s judging panel thought the top-lit inner sanctum approached by the contrastingly dark circular labyrinthine-like passageway creates a strong sense of awe and reverence and echoes ancient temple architecture. They were most impressed by the concept of this work and the way that the reversed inscription is read in its reflection in the pool and then is erased by the merest disturbance to the water. They found the effect of the words then gradually re-emerging from the ripples unforgettable.

Award for Excellence in the Conservation of Public Sculpture

The 2021 Marsh Award for Excellence in the Conservation of a Public Statue or Public Fountain went to Plowden & Smith Ltd. for their conservation of Silverdale Mining Tribute Monument by Steven Whyte and Michael Talbot, Newcastle-Under-Lyme in Staffordshire in 2020.

The village of Silverdale and surrounding area was dominated for many years by the coal industry. The last colliery, Silverdale, closes in 1998 and the Silverdale Mining Tribute Monument is dedicated to over 140 miners who lost their lives in the Silverdale mines. In addition to the plaque that marks the names of over 140 miners who lost their lives in the mines of Silverdale and surrounding areas (together with one who was unnamed but remembered); there are plaques commemorating notable people from Silverdale; including engineer John Cadman of Silverdale who became chief executive of British Petroleum; former Silverdale miner Sir Joseph Cook, who became Prime Minister of Australia; the local political firebrand Fanny Deakin; and local miner, educationalist and author Harold Brown. 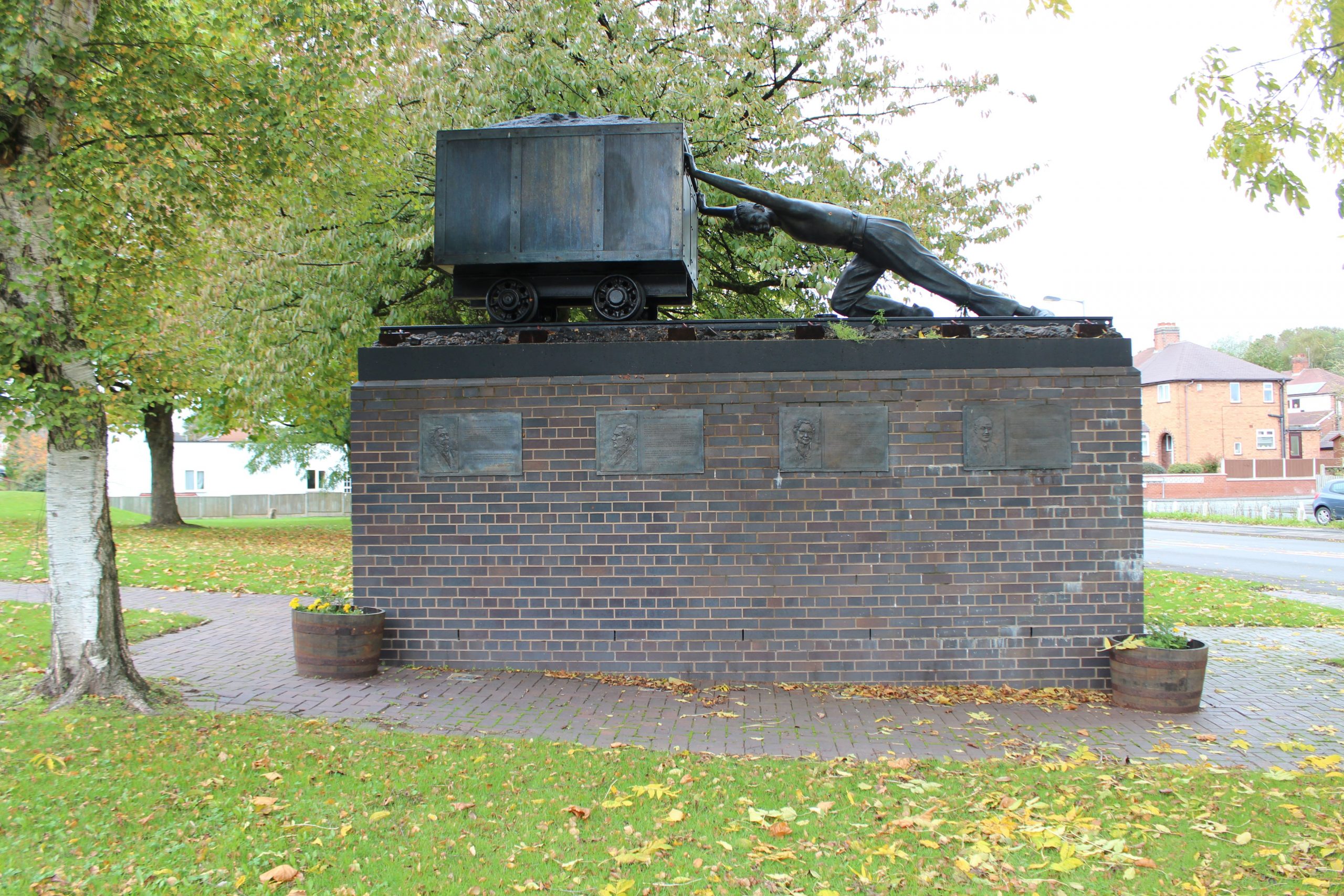 The monument was erected in 1996, but had deteriorated significantly and was in need of radical intervention. There was real concern that if the monument was left much longer it would have degraded beyond repair. The PSSA’s judging panel appreciated the sensitivity which had gone into the conservation of this public sculpture. The conservation of the work has given it a new lease of life and longevity in the community, where it has huge significance in acknowledging the gruelling everyday work of many of their descendants and family and in celebrating their memory. The panel felt that the conservation by Hal Jacob of Plowden & Smith Ltd had not only honoured the artistic intention, but had also improved elements of the design which would future-proof the monument. The project showed how the conservator needs to interpret conservation philosophy in a flexible and intelligent way.

On receiving the award, Camilla Hughes-Hunt, Managing Director of Plowden & Smith Ltd. said ‘We are extremely grateful to Silverdale Parish Council for choosing us to take on the restoration of a memorial their community rightly takes such pride in. We’d also especially like to thank the many local residents who championed the initiative to restore this local landmark, and throughout the restoration process, took such a keen interest in following its progress.’