When Gertrude Alice Meredith Williams died, in 1934, the Scotsman referred to her ‘undoubted genius’. Six years earlier she had been elected an Associate of the Royal Society of British Sculptors. Her proposers were Charles Allen, one of her teachers at Liverpool School of Architecture and Applied Art and Alexander Carrick, a fellow artist on the Scottish National War Memorial. Based in Edinburgh from 1906, following marriage to illustrator and painter Morris Meredith Williams, Alice made her living from small, often whimsical, sculptures for domestic settings, and designs for stained glass. She exhibited regularly at the Royal Scottish Academy and at the Arts and Crafts Exhibition Society in London. The First World War changed everything. A series of 3D panoramas of women’s war work for the Imperial War Museum led to a decade of collaboration with the architect Robert Lorimer and the opportunity to work on a monumental scale. Whatever its subject or size, her work is imbued with humanity. This talk will illustrate the range and skill of this little known artist.

Phyllida Shaw is the author of An Artist’s War. The art and letters of Morris & Alice Meredith Williams (The History Press, 2017) and Undaunted Spirit. The art and craft of Gertrude Alice Meredith Williams (Independent Publishing Network, 2018). She is a great niece of Morris Meredith Williams and inherited his First World War sketchbooks and correspondence. These were the starting point of her research. She read European Studies (History and French) at Lancaster University. She worked as arts administrator and as a sub editor and journalist, before becoming a researcher and facilitator in the cultural and social sectors. She has given talks on Alice and Morris Meredith Williams at the National Archives, the Royal Society of Sculptors, the Scottish National Gallery, several branches of the Western Front Association and literature festivals in Henley, Lichfield and Taunton. 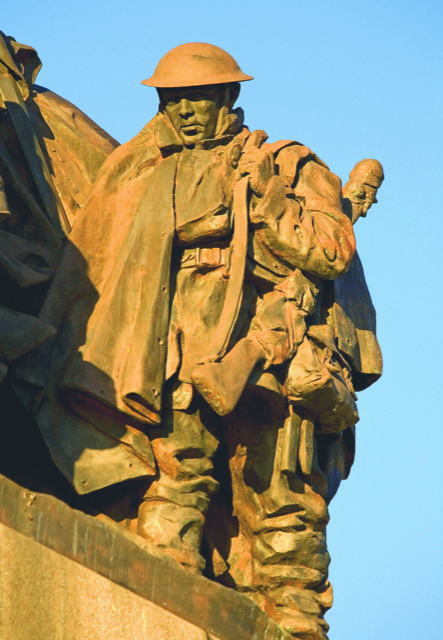 The Spirit of the Crusaders (detail) for Paisley Memorial