Barbara Hepworth was a major sculptor with an international reputation. She happened to be a woman, twice married and with four children – three arrived at once, triplets. The current interest in Barbara Hepworth is not just the ‘me too’ moment but is deeply underpinned by making her lifework available through the Hepworth Wakefield, Hepworth Museum in St Ives, and access to papers and artefacts made possible through the extraordinary generosity and determination shown by her family. But arguably the acknowledgement of the full scale of her achievement has been late coming – perhaps due to being a woman in a man’s world.

This is a substantial book with wide coverage of material, beautifully designed – good to hold and good to read. The author, Eleanor Clayton, has meticulously researched all the facets of an interesting life lived intensely and fully, in quite turbulent times and often with little income. She has a light touch in the documentation she selects to show the evolution of Hepworth’s work from small intimate, hand-carved to great public commissions, constructed with assistants.

The book tracks Hepworth’s life from leaving her home in a middle-class Yorkshire family, art school in Leeds, moving to London to the Royal College rapidly developing adult friendships with contemporary artists, then a travel grant to go to Italy where she ceaselessly studies historical art and architecture. She meets the sculptor John Skeaping and soon they are married and living in London. Throughout this time the intensity of her focus on work is compelling and evident in every action. She is rigorous and focused. She is an artist, a sculptor and a carver. She eagerly becomes part of a milieu of like-minded contemporary artists, writers and architects. Soon baby Paul arrives and her carving takes place between domestic duties.

The letters that Clayton selects tell this story of Hepworth’s art and life. There are times when we might have wished to see some of the other letters such as those to her parents or siblings, or perhaps those of a mundane nature, such as ordering materials or negotiating the rent.

The sequence of the book keeps pace with the developments in Hepworth’s art and life. The first years move with eagerness to the moment when she meets and falls in love with Ben Nicholson. She writes to him in Paris: ‘ Dear … I must write to tell you how much I love you … your dear head is like the most lovely pebble ever seen and your thoughts are as clear as the pebbles just left by the sea …’ Her own marriage to John Skeaping collapses, as does Ben’s marriage to Winifred, with whom he has three children. But each keeps in close touch with their former spouse. An energetic period of work ensues in the thirties, with a widening group of like-minded European artists, writers, architects in the context of impending war across Europe.

Barbara became pregnant by Ben and in 1934 triplets were born – Sarah, Rachel and Simon (referred to as SRS), a surprise and shock arrivals. Six weeks later Nicholson returns to Paris, and the milieu of artists so important to both of them. They marry in 1938.

At this time Hepworth developed a close friendship with Margaret Gardiner, also living in Hampstead. Gardiner was a radical modern British patron of artists and a left-wing political activist. She donated her collection of art to Orkney where she sponsored the Pier Arts Centre to provide it a permanent home. Hepworth describes her as her ‘one intimate friend’. The intimacy is apparent in the many letters between them as women sharing for example an elegant taste in dress. But it is an intellectual friendship sharing political and social concerns. Margaret was also generous and helpful to Barbara, and as a patron bought some of her early works.

In the following years the babies grew up, often without the benefit of the presence of their father, although Nicholson and Hepworth were mutually supportive professionally. Barbara is perhaps a typical female multi-tasker – but also a multi-thinker. Both sides of her brain working at once. Parents working at home in lockdown with synchronised home-schooling will surely recognise this.

Both Hepworth’s work and the babies flourished. She was remarkably efficient in her use of time and resources, and enormously persuasive. Repeatedly there are signs of generous support: a timely sale, a discount on school fees, a place to stay, inclusion in an exhibition group.

There was a sense of urgency as the 1930s progressed; the fear of Fascist rising prompts many artists to join together as ‘Artists for Peace’. Idealism can be seen in political gestures and the reforming zeal in publications such Unit 1 and later Circle. Historical events intervene with the outbreak of war in 1939 and are well chronicled in their impact on Hepworth. Just before war was declared, the whole family moved to Cornwall to stay with Adrian Stokes and his wife Margaret Mellis, later renting a house nearby. Letters reveal that work continued throughout, though hampered by time, domestic responsibilities, schooling, money and cramped working conditions. Hepworth adapted to the circumstances, urging Ben to bring materials on his next visit from London. She worked continuously and there are exhibitions; their only income is from the sale of works.

In 1944 Hepworth holds a major exhibition in Wakefield, but at the same time daughter Sarah became seriously ill in hospital in Exeter – pre-NHS, pre-penicillin, and in a city hit by bombing. Her friend Margaret came to their aid to pay the hospital bills, and Sarah slowly recovered. There is a brief mention at this time of Hepworth being able to buy English hardwood as well as wanting to acquire her own seasoned timber from Mall studios. I would love to know more of how she selected her timber for carving. Both their size and quality were remarkable. Yet much of the nation’s stock of seasoned timber had burned in the London Blitz at Surrey Docks.

At the end of the war, there is jubilation followed by a period of exceptional exhaustion and also great interest in Hepworth’s work. By 1949 she had recovered and bought the house and garden ‘Trewyn’ in St Ives, now the Barbara Hepworth Museum, that was to become her home and workplace for the rest of her life: a beautiful workplace with basic domestic accommodation, and ample studio spaces inside and out in which to carve wood and make plaster casts. The enclosed garden allowed her always to show some work in situ and in privacy. In rapid succession she was commissioned to be the sculptor to represent Britain at the Venice Biennale in 1950, and to produce sculpture for the Festival of Britain in 1951. An exhibition at the Whitechapel Art Gallery followed in 1952 with a monograph in the same year. Hepworth’s long interest in music is manifested in her friendship with composer Priaulx Rainier, and later Michael Tippett, resulting in commissions for costumes and stage sets. She embarked on numbers of new ways of working, including constructions and producing casts of her works, as well as continuing to draw. But physical and emotional exhaustion continue to take their toll. Her marriage to Ben Nicholson came to an end. She suggested he was jealous of her successful career, which he may well have been.

In 1954 her son Paul Skeaping an RAF pilot, died in a crash. The unbearable enduring sadness was relieved by going to Greece with Margaret Gardiner and experiencing a richness of regenerative stimulus which again resulted in new work.

Throughout the post-war period Barbara Hepworth exhibited widely and completed numerous extraordinary commissions, notably for the United Nations building in New York. Finally she had a prosperous life and enjoyed much acclaim. Her work is her life. 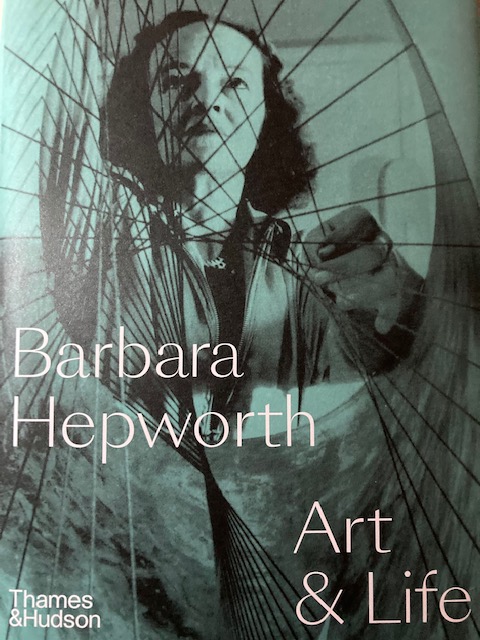