Book launches are one of the casualties of the pandemic, and the publication of this volume illustrates the problem. It reached the bookshops in early 2020, which gave the editors little opportunity to publicise its arrival before the first lockdown and all the ensuing restrictions were in place. So most of us will be unaware that this first collection of writings and interviews on contemporary sculpture is in print.

I was fortunate to get hold of a copy a few months ago. At the time, I was reading up on public art and was steeped in critical debates surrounding urban regeneration schemes, social inclusion policies, public art strategies, and years of austerity. It was a relief to swap the formality of those analyses for the informal, often playful, prose, plays, essays, statements, and interviews contained in this volume. I was soon immersed in a refreshingly different discussion of art in the public realm. One of the many interesting contributions, is an excellent interview with the sculptor Hew Locke who also spoke at the PSSA’s Toppling Statues conference last autumn.

Because this book is a pleasure to read, anyone who sets out to investigate one aspect of contemporary sculpture is likely to find themselves drawn down new avenues of enquiry. There are fifty texts to explore, of which almost a third are published here for the first time. The selection focuses on writings and interviews from Britain and Germany, though there are also contributions from elsewhere in Europe, the USA, and Asia. While most of the texts were written between 1995 and 2015, the authors bring a far broader perspective than those dates suggest. At one end of the scale are artists, such as Richard Serra and Ilya Kabakov, who began their studies in the 1950s, and at the other are those whose careers were launched in the millennium, including Falke Pisano, Jan de Cock, and Michael Dean. Given the scope of this volume, it will come as no surprise to learn that it was several years in preparation.1 The following account is informed by a conversation with Jon Wood (16 April 2021).

Jon Wood and Julia Kelly brought to this project a substantial separate and shared history of research into modern and contemporary sculpture, which included collaboration on The Sculpture of Bill Woodrow (London: Lund Humphries, 2013). Preparation of the current volume was also informed by Wood’s experience as co-editor of the Modern Sculpture Reader (Henry Moore Institute, Leeds, 2007) with Alex Potts and David Hulks. That book was well-received from the outset, and reader interest in writings on sculpture was affirmed by the J. Paul Getty Museum publishing a second edition in 2012. The Modern Sculpture Reader is weighted towards writings from the early-mid twentieth century, and only ten out of seventy texts post-date 1990. So Wood and Kelly saw the need for a second anthology focused on contemporary sculpture.

When the editors began the lengthy task of trawling through numerous exhibition catalogues, journals, and other sources, they were careful to avoid giving undue prominence to works made for white cube galleries. On the contrary, Wood and Kelly set about finding texts that highlight the diverse forms of sculpture – everything from statues, portrait busts, and public monuments, through to found objects, photographs, and performances. They also wanted to show how widely artists use both traditional and modern processes, such as Katharina Fritsch’s casts in plaster and polyester, Thomas Schütte’s works in Fimo clay, photography, glass, and bronze, and Paul McCarthy’s sculptures made variously from resin, wood and inflatable materials.

But the most important editorial decision came out of their conversations with artists. These discussions made it clear that artists continue to be very interested in the idea of ‘sculpture’ and in the meaning of the ‘sculptural’. Indeed, the process of object-making remains central to many artists’ practice despite the freedom to work in any form or media. This led Wood and Kelly to the conclusion that artists’ writings and interviews offer the most telling and important insights into what is happening in sculpture right now. As they proceeded with the selection, the editors included a few artists, like Elmgreen and Dragset, who mainly work in other media because their words and ideas on the nature and practice of sculpture are so apt. The result is the first book about contemporary sculpture solely authored by practising artists.

Putting artists and works centre stage led Wood and Kelly to opt for a deliberately light touch in the organization of the texts. These are grouped thematically under three broad headings: first, objects, materials, and processes; second, modes of figuration (both as subject and in performance); and third, spaces and places. This minimalist approach offers basic guidance on content but also leaves the reader free to discover other connections between the texts – such sculptures which only exist in photographic form, works that become, or shape, the viewer’s space, or objects that ventriloquise and ‘act out’.

Because half the contributions are interviews, the reader is often listening to the artist’s words in a very literal way. The editors have given prominence to this type of text to highlight how important interviews have become since the invention of the cassette tape in the early 1960s. Kiki Smith’s remarkable discussion with David Frankel about the development of her practice, and Katharina Fritsch’s description of her working methods in conversation with Susanne Bieber both illustrate the rich potential of a carefully structured interview. Elsewhere the spontaneity of the conversational form is uppermost. We hear this clearly in Nathaniel Mellors’ musings on figuration, language and ‘the absurdity’ of trying to make a work ‘speak’ in discussion with Jon Wood recorded specially for this volume.

That kind of playful exploration shows that for many artists language is as rich and malleable a tool as the familiar physical apparatus of studio practice. More than this we are repeatedly reminded that language and action are not just parallel forms of expression but also intimately connected. We hear this in the Verb List – an inventory of processes that Richard Serra drew up to ‘create the conditions to enable him ‘to work in an unanticipated manner and provoke the unexpected’.2R. Serra, ‘Questions, Contradictions, Solutions, Early Work’, Jon Wood and Julia Kelly (Eds.), Contemporary Sculpture: Artists’ Writings and Interviews, Berlin: Hatje Cantz, 2019, p. 283. An overlap between word and action re-emerges in many other texts including Krysten Cunningham’s ‘1,000 Words’. Here the artist’s work in the studio is condensed into a thousand one-word sentences, which leave the reader to piece together the experiences behind that abrupt statement of materials, actions, and reactions.

We are so used to engaging with objects visually, whether in the gallery or through the mediation of photography and video, that there is a novelty about coming to sculpture through the written word. Our reliance on images has been increased by the explosion of social media, which has also reduced the role of text to a handful of characters. Wood and Kelly’s excellent anthology of artists’ writings and interviews offers a welcome contrast to such fast-paced visual encounters, and invites us – a little like the slow food movement has encouraged us to think again about what we eat – to embrace a more contemplative approach to sculpture and the sculptural.

That we have an opportunity to make this exploration is also due to the Cragg Foundation. This is a nonprofit established by the sculptor Tony Cragg in Wuppertal, North-Rhine-Westphalia, to collect and exhibit sculpture, as well as supporting research and publications. It is through the Foundation’s generous support that the publication of Contemporary Sculpture: Artists’ Writings and Interviews has been made possible. 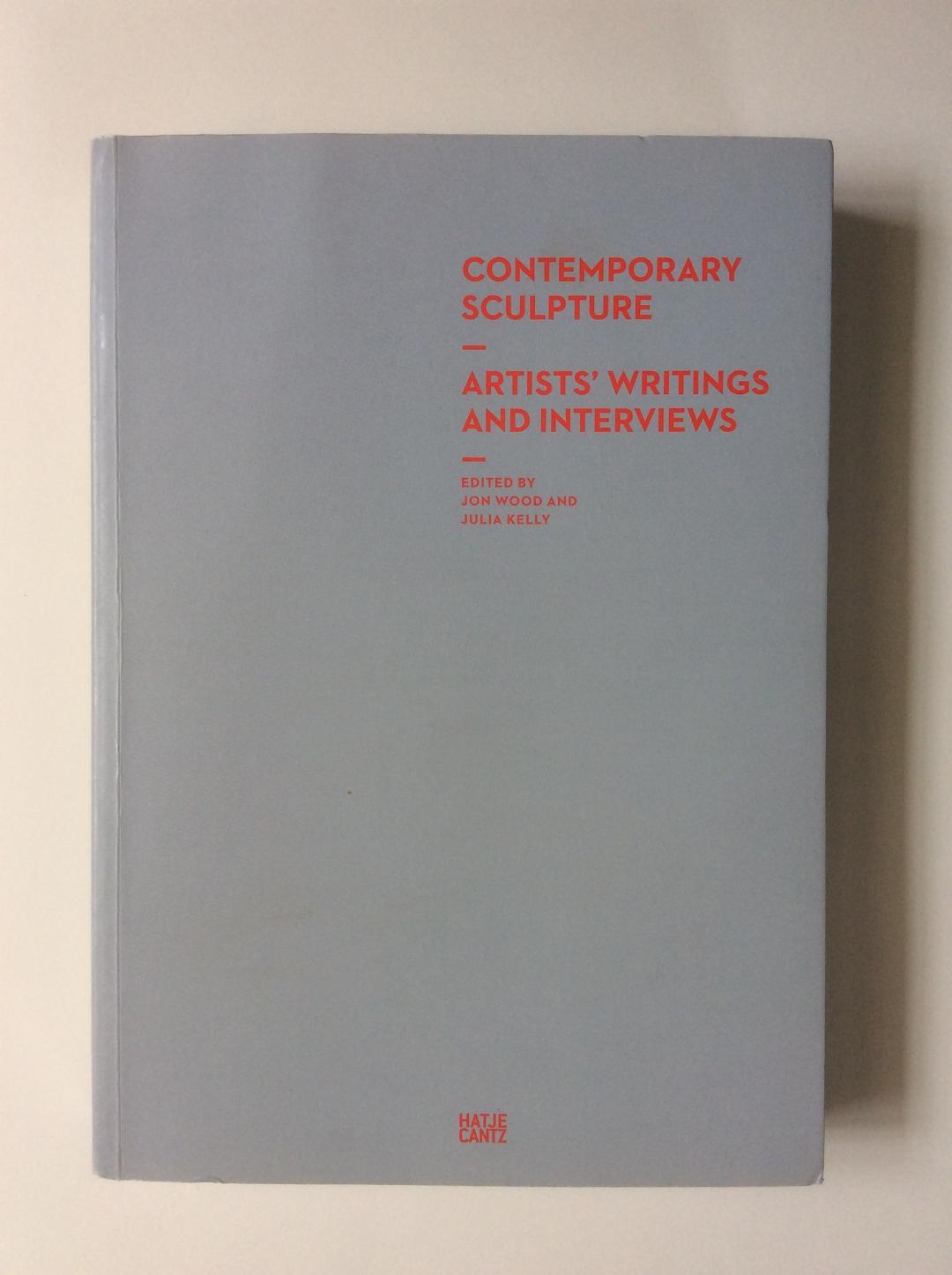