Philip Attwood’s timely study begins at the end of Mary Gillick’s long career as a sculptor and medallist. Were it not for an extraordinary moment of late career public recognition — for her portrait of the late Queen Elizabeth II for the new coinage released in 1952 — this long neglected artist could have been lost to art history entirely. Attwood aims to contextualise the famous portrait and its attendant medallic designs, while successfully recovering the significance of a substantial body of work made over the course of the first half of the twentieth century. The publication will be of particular interest at the present moment, as Martin Jennings’ design of the effigy of King Charles III is about to enter circulation in the United Kingdom, providing a point of comparison with Gillick’s approach 70 years ago.

Attwood posits the possibility that the lack of attention directed towards her artistic legacy was related to her status as a woman, coupled with the career of her husband – the sculptor Ernest Gillick – whose modest reputation continues to obscure her own. In addition, the author recognises that Mary Gillick’s work has been reductively positioned outside the canonical narrative of British modernism, further relegating her contribution. A generation older than Barbara Hepworth and Henry Moore, Gillick’s training at Nottingham School of Art in the last years of the nineteenth century and at the Royal College of Art in the opening years of the twentieth, moulded an artist whose work remained essentially rooted in Renaissance forms and late Victorian methods and materials. Too easily dismissed as anachronistic for these reasons, Attwood deftly discusses the ways in which Gillick synthesised the past and present to create designs that were sensitive, inventive and modern in their own quiet way.

The Gillick family’s donations to the British Museum and Leeds Museums and Galleries in 2004 began to catalyse new research on Mary Gillick and her place in sculpture studies. My own limited participation in this field was motivated by these incredibly rich collections, resulting in the exhibition Mary Gillick: Her Art in Your Pocket at the Henry Moore Institute in 2017-18. The archival material in Leeds is extensive (although yet to be catalogued) and, as the author notes, it holds tremendous potential for further study. Attwood is clear that the present publication is not a biography, but a chronological account of Mary Gillick’s medallic work in the context of British sculpture and artistic practice more broadly. The book does however provide a useful biographical chapter to situate the reader.

While there may be more to say on the details of Gillick’s education in Nottingham and London, Attwood clearly articulates the status of late nineteenth-century medallic design, chiefly through examples in the collection of the British Museum. This is of course understandable, given the author’s long and distinguished career in the Department of Coins and Medals and the museum’s involvement in the publication. The main body of the book is concerned with close readings of Gillick’s cast medals, struck medals and memorials in the manner of a catalogue raisonné. The author provides details of the commissions and exhibitions that sustained Gillick’s practice and is admirably transparent about the instances where there is a paucity or absence of primary evidence in the archive.

Gillick was a frequent exhibitor at the Royal Academy of Arts’ Summer Exhibitions. As readers may not be so familiar with the presentation of medallic designs at the Royal Academy, it might have been an opportunity to describe how audiences encountered these objects. In some instances the material of the submission is noted—usually bronze—but it would be useful to know whether plaster casts or other preliminary forms were shown, as with the display of sculpture in this context. Installation images would have been a welcome addition, although they may not exist or be sufficiently legible for publication.

The numerous illustrations are generally of an excellent quality and the demonstration of successive stages of production through drawings, photographs and plaster models is particularly satisfying. The text is animated through extensive quotations from the archive, supplemented with transcribed letters from the artist’s mother gathered together in the appendix. The archive would support further study on her approach to typography and photography, surface treatments and patination, which are mentioned briefly in the text but beyond its scope for detailed analysis. There would also be opportunities for future discussion of the political and ideological implications of Gillick’s work, particularly the circulation of her designs across the Commonwealth.

My familiarity with the collections held in Leeds means that I am somewhat unfairly aware of the material that has not been included in this particular study. For instance I would have liked to have seen the preparatory sketches, photographs and plaster models of Adam and Eve reproduced, given that they appear to be the only extant examples of her sculpture in the round. Illustrations of the drawings, photographs and plasters of the portrait medallions of Lionel Michael Lowry Barnwell, Frederic Anstruther Cardew and Kathleen Ferrier could also have provided further insight into Gillick’s practice through the Leeds collections. Their omission may be the result of practical considerations and certainly do not detract from interest and utility of the book the for the general reader.

Through this publication Attwood has provided a vivid record of what it meant to build a working life as a sculptor and medallist in the first half of the twentieth century. The text is both accessible and erudite and provides a balanced assessment of Mary Gillick’s contribution to British art and design. It will no doubt function as an important foundational study on which to build further research and, we might hope, bring yet untraced examples of her work to light. 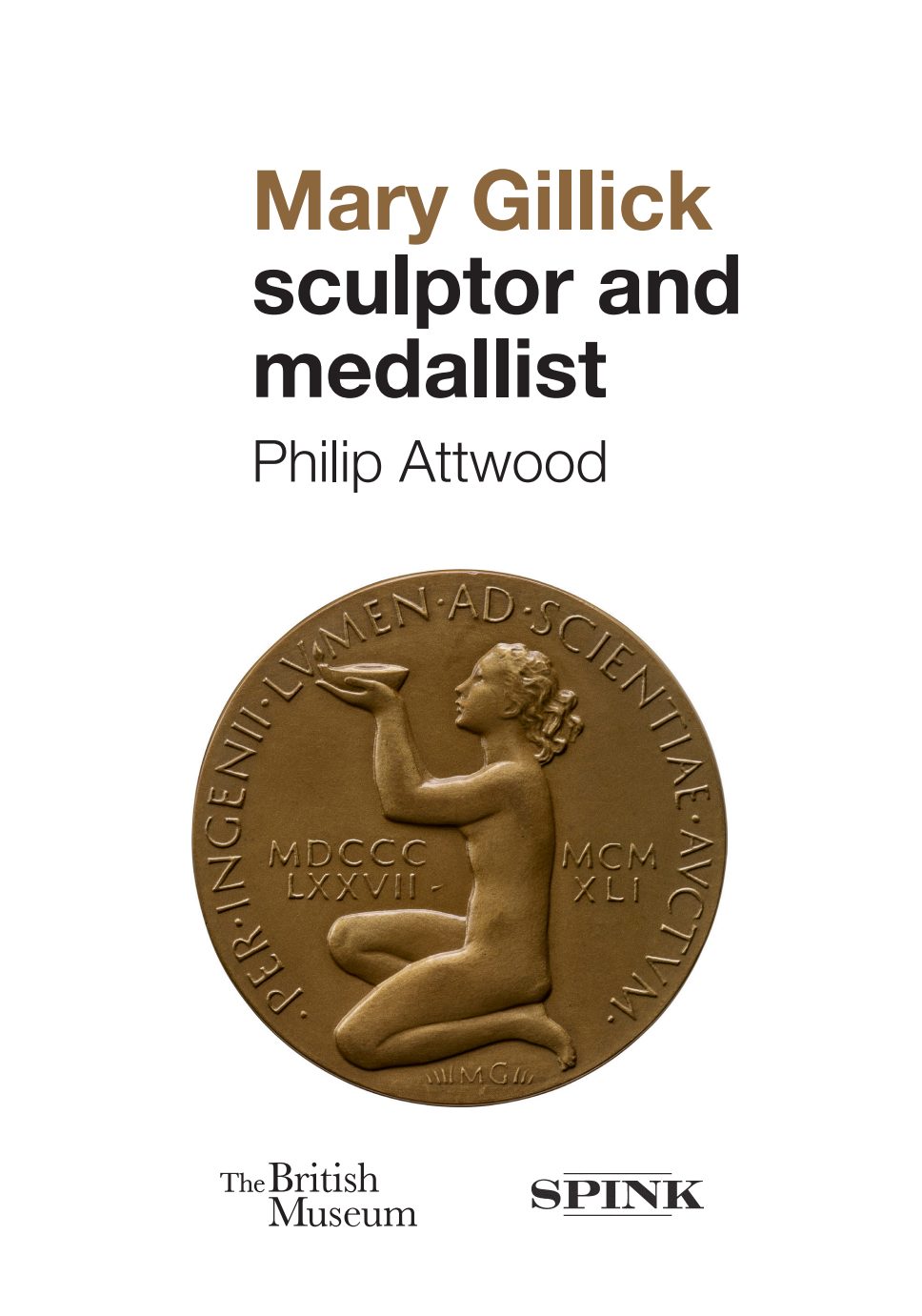