The Art and Science of the Crystal Palace Dinosaurs

On first visual appraisal, this book looks appealing, of good quality and strong layout. The images do not disappoint, with a fine selection of large glossy photos of the dinosaurs now and throughout their time in the park captured in beautifully textured detailed shots. There are also a good range of press images, related drawings, scale models and explanatory diagrams. All exceptionally useful for putting into context the palaeontology and ‘science’ related aspects. I was particularly interested to read this book, as I am currently working on a community project for the South London charity ‘Invisible Palace’ researching the sculptures of Crystal Palace Park but (of course everyone asks) not examining the dinosaurs. Although the distinct iron and glass structure of Joseph Paxton’s Crystal Palace burnt down in 1936, the grounds still retain glimpses of their Victorian past, including more overtly the fine Italian brick subway and grand low-level railway station; so subject interest remains high, both locally and nationally.

On the front dust cover, the book provides a comprehensive synopsis of what the authors will be exploring including the significance of the ‘world’s first paleoart project; introducing the associated designer and builders; overviewing the less appreciated ‘Geological Illustrations’ and outlining the conservation risks and future challenges.

The detailed book introduces us to the main designer of the work Benjamin Waterhouse Hawkins (1807-1894), a sculptor, natural history artist and expert in depicting mammalian form. Working alongside Professor Richard Owen (1804-1892), considered an authority on ‘anatomical correlation’, the ability to predict whole body forms from isolated body parts. Although Owen acted as an advisor, it becomes apparent he rarely had hands-on involvement, although he did write the dedicated visitor’s guidebook in 1854, Geology and Inhabitants of the Ancient World.

The back of the dust jacket tells us that the authors of the book are experts in their field. Mark P. Witton, a leading palaeontological artist, designer and consultant, creates his own artworks around the world for clients such as the Natural History Museum and the American Museum of Natural History, and Ellinor Michel is an evolutionary biologist, ecologist and taxonomist at the Natural History Museum. More importantly, both have a personal interest in the project, Witton vividly remembering visiting the ‘Dinosaurs’ as a child and Michel being the co-founder and chair of the Friends of the Crystal Palace Dinosaurs.

In the introduction the authors gently lead us through some of the trickier concepts discussed. The Crystal Palace story helped Ellinor Michel develop her interest in ‘Deep Time’ and the history of the earth sciences etc. which fortunately are explained in layman terms but embedded in science terminology. We learn more about how these scientific ideas came to life back in 1854-55, when the ‘Dinosaurs’ were opened to the public in the grounds.

The authors aim to put right misconceptions and the first fact we learn is that only four of the exhibits were actually ‘true dinos.’ In some ways they felt this emphasis on one aspect undersold the project, since the area comprised 37 models of over 31 species of extinct mammals and their relatives, flying and swimming reptiles and prehistoric amphibians. Although we discover the ‘Dinosaurs’ weren’t the first life-size flesh reconstructions, they were considered significant in that they advanced the depiction of their species in three-dimensions, in terms of anatomical detail, realistic posing and behavioural depictions according to what was known at this time.

The authors tell us that Waterhouse Hawkins and his team aimed to revive the past with their dinosaurs, their representations guided by the most up to date fossil data and influenced by living species: promoted as ‘real extinct animals’ rather than imagined monsters. It was noted that this idea of reinstatement continued into the displays of sculptures made for inside the Palace. Even though plaster casts had been taken of the world’s most celebrated statuary, the copies did not remain as ‘real (or replica) artifacts’ such as would be found in a museum, but allowed the public to see how they would have looked ‘thousands of years ago’. In terms of our sculpture project, it was interesting to think how this concept extended into the grounds, where the twelve sphinxes on the upper terrace had been cast from the damaged ‘Great Sphinx of Tanis’ displayed in the Louvre. Yet the Crystal Palace versions were designed intact, the restoration extending to a complete defined nose and readable hieroglyphics.

We learn that the dinosaurs were first realised full-size in clay, before being rebuilt from a core of bricks or tile layers, held together by coarse aggregated Portland Cement. Waterhouse Hawkins took plaster casts from the clay to transfer details of the skin to the fine sand cement skin. Wanting the dinosaurs to stand independently on their own four legs, he added iron bracing to strengthen necks and heads and extensive internal framework. Unlike the vast array of sculptures on the terraces, he did not want to use any signs of visible bracing such as rocks, trees or foliage to support their great bodies.

The book is set well within its Victorian context but one aspect I was left wondering about was how the dinosaur project fitted in with Joseph Paxton’s overall vision, and how much he was involved in its inception. Although we learn that Richard Owen tried to organise a collection of fossil specimens for display and failed, how much of the science being explored by Waterhouse Hawkins and Owen was replicated, related to or an extension of any of the Natural History or Geological exhibits inside the Crystal Palace? It was reassuring to learn that the authors, were similarly bewildered by gaps in information, inconsistencies and contradictions within official guidebooks and less official documents, particularly in terms of numbers of works stated, in what formations, works misidentified, moved and even modified, often without any apparent related documentation.

From the perspective of sculpture, it is interesting to ponder whether Italian sculptor Raffaelle Monti (1818-1881) employed as an officer at the Crystal Palace, offered any advice to Waterhouse Hawkins who was using predominately concrete and metallic elements for the dinosaurs. Monti created many of the fountains, vases and sculptures in the grounds also from experimental cement-based materials and electrotype processes. This led to financial problems in the realization of these works, due to increased materials and labour costs, leaving him on the verge of bankruptcy by November 1854. With financial problems generally apparent early on, by September 1855, Waterhouse Hawkins’ mammals for the Tertiary Island were scrapped, leaving a half-finished woolly mammoth ‘doomed to obscurity.’

I enjoyed reading about how the Crystal Palace Company approached publicity with its exploitation of this prelude to ‘dinomania’, by giving journalists early access to the work sheds before completion of the work and built on this with their most famous public relations event, the 1853 New Year’s Eve Banquet, ‘inside’ the mould of the Iguanodon. The book reveals more fascinating details about the true facts behind this entertaining publicity stunt.

An unexpected interest arose from reading about the vast undertaking of the Geological Courts by geologist Dr David Thomas Ansted who planned this attraction and educational display with Joseph Paxton. The replication of modern geological outcrops based on real UK field localities and the author’s description intrigued me enough to visit this specifically.

The book stands on its own, but it is hard to resist taking it along if you can manage to visit the work in situ or want to participate in a Friends of the Dinosaurs tour. The middle chapters contain in-depth analysis of each individual work, in terms of conception, realisation, conservation and restoration. Although researched and written during the Covid lockdowns, the authors managed to amass a wealth of information and explore previously lost details. As they point out, the book would not only be useful to people who have grown up with the dinosaurs (like me), or to experts in fields such as geology and palaeontology, but also to those in the fields of political and social sciences.

For all interested parties, it is acknowledged that the future of the dinosaurs cannot be taken for granted. While laypeople were initially their greatest fans and educators and academics their most vociferous critics, the authors report that this has mellowed over the years, and the work even now is praised in more knowledgeable circles. Much is being discussed currently in how far to retain the narrative of the dinosaurs as crumbling but physically authentic Victorian relics, or whether to manufacture replacement elements and return lost parts. However urgent repairs do need to be made, and in 2021, when the jaw of ‘Megalosaurus’ collapsed, an Historic England Culture Recovery Fund grant funded a plastic prosthetic intervention as a temporary solution. This was created by specialists using 3D scans from the fragmented head, plus archival scans to produce the replica with 3D printing processes. It is recognised that approaches will change as new technology, data and interpretations arise. So, more research in archives is needed to support conservation actions for what remains in the park, whether Paleoart or modern and classical sculpture themes. 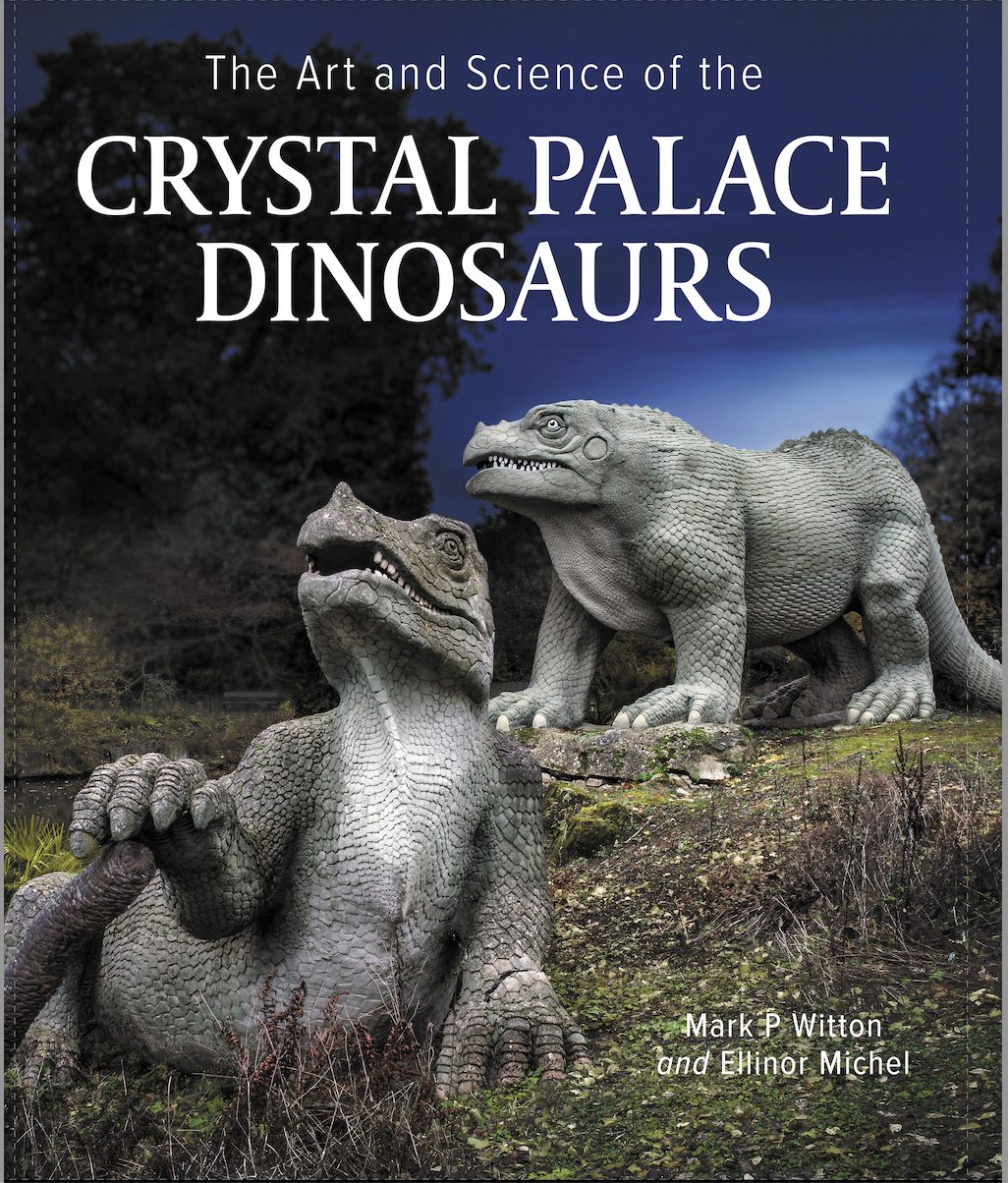