The Remarkable Pinwill Sisters: From Lady Woodcarvers to Professionals

The three Pinwill sisters, Mary, Ethel and Violet, flourished as professional sculptors and woodcarvers in Devon and Cornwall from the 1880s onwards, Violet continuing as a carver until shortly before her death in 1957. Helen Wilson meticulously tracks the careers and output of these three artists, this being a work of both social as well as art history. Integral to the story is the fact that the Pinwills were exceptional in being female artists. Their achievement should be set alongside other women carvers of the time. Wilson pointedly quotes from the contemporary Devon woodcarver Harry Hems’s review of a book, Practical Woodcarving, published in 1907 by an English carver of a previous generation, the influential teacher Eleanor Rowe (1852-1920). Hems evidently felt that women woodcarvers were inferior to men, whilst graciously noting that Rowe was an exception, although her fundamental fault was not being a man, ‘for a very clever man she would make’.

Throughout the book the prejudice endured by women artists of the period is intermittently apparent, although the thrust and appeal of Wilson’s study is indeed the Pinwills’ remarkable artistic accomplishment, rather than being victims of misogyny. When the sisters set up their own business as professional woodcarvers in Plymouth in 1891 they deliberately chose the name Rashleigh, Pinwill & Co. (Rashleigh being the middle name of one of the sisters) in order to conceal the fact that they were female. Much of their carving was carried out to the designs of the architect Edmund H. Sedding (1863-1921), although on occasion they also designed their own reliefs. Wilson notes their productivity: their work is to be seen in over 180 churches in the South West. The Pinwill sisters’ training was conducted at home when they were still teenagers almost certainly by William J. Giles (b.c. 1862), who was employed as chief woodcarver in the church of St Peter and St Paul at Ermington, Devon, where their father was vicar.

This book is plentifully illustrated with photographs of high quality. Almost all the work is ecclesiastical, in the tradition of the arts and crafts movement. The reader can enjoy images of carved birds, oak leaves, poppies, a yoked stag and a spider’s web, as well as kneeling angels in prayer, sensitively rendered in oak. The Pinwills also sculpted in alabaster, seen in for example the reliefs on the reredos at Ermington church. Their proficiency in carving wood seems to stem ultimately from their great-grandfather William (b. 1731), who was a ship-builder, and it was their mother Elizabeth who actively encouraged them to take up carving as a profession. Wilson delves into the archival records and census returns of the family, elucidating and illuminating the history of the Pinwill sisters’ ancestry. An epilogue discusses their legacy today.

The book is organised chronologically with a few focused chapters on particular topics, such as the life and work of Sedding and particular churches. A glossary, bibliography and index provide useful reference points. As the author herself says, more may be revealed in the future about the Pinwill sisters’ work, but in the meantime this is an essential reference book, illustrating not only individual sculptures, but discussing in depth the trajectory of the Pinwills’ sculptural careers and their place in the history of church furniture and decoration. 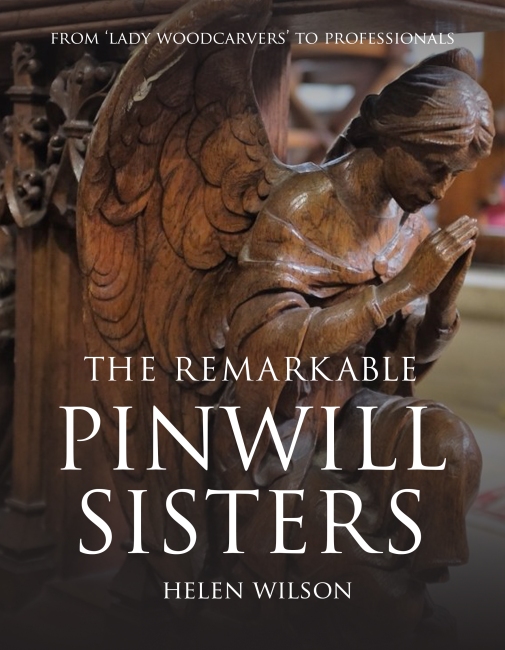