‘“There was a retrospective at the Tate. And I had a lovely orange painting there. But someone wrote IRA all over it.” His paintings were always being attacked; they evoked colossal anger in people.’

So recounted the collector Alistair McAlpine in the documentary film about the artist William Turnbull, Beyond Time (2011), made by the artist’s son Alex Turnbull. Although there is no evidence to confirm that a painting was attacked in the 1973 Tate retrospective, McAlpine’s story places Turnbull in good artistic company. Large-scale, powerful paintings have consistently attracted acts of iconoclasm and protest, from the Rokeby Venus (attacked in 1914) to Dalí’s Christ of St John of the Cross (1951) (attacked in 1961 and 1980), and the 1970s onwards brought similar attacks on abstract paintings by Barnett Newman and Mark Rothko, artists Turnbull knew personally (Barber and Boldrick 2013, p. 130). In the catalogue accompanying the Tate exhibition, the curator Richard Morphet called Turnbull’s paintings ‘things, acting on us in their own right and not merely as expressions of an art milieu’ (Morphet 1973, p. 61). Given these perspectives on the impact of Turnbull’s paintings, it is unsurprising that McAlpine continues his interview by comparing him to Matisse, Gottlieb, and Rothko. After all, Turnbull was an artist whose work stood on an international stage, beyond the history of post-war British sculpture.

Recognising Turnbull’s internationalism is one of several important contributions made by William Turnbull: International Modern Artist, a large and well-illustrated 420-page book, edited by Jon Wood and produced in collaboration with Turnbull Studio. While previous publications have consistently addressed the artist’s paintings and sculptures and biography, sometimes historically aligning him with British, Scottish or post-war artists, this book extends our understanding of Turnbull into the present, by bringing together a wide range of voices and areas of expertise from different generations. Artists, art historians, curators and writers all bring new insights into individual artworks through short texts, and longer essays. Particularly welcome are the texts by artist contemporaries of Turnbull’s generation and later, including John Dee, Norman Dilworth, Tess Jaray, Liliane Lijn, Peter Randall-Page, Michael Sandle, William Tucker and Bill Woodrow. Included too are contributions by curators and writers who worked closely with him, such as Richard Morphet, Clare Lilley, Peter Murray, Patrick Elliott and Amanda A. Davidson. Equally important are contributions from beyond these circles which offer refreshing new perspectives, such those from the artists Olivia Bax and Keith Coventry and curators and art historians Natalie Rudd and Marin Sullivan. The extended essays both cover important stages of Turnbull’s practice, and expand upon previously underexplored aspects of his work, ranging from music and anthropology to the artist’s writings, material practices and techniques. A fleeting reference to iconoclasm (which may or may not correspond to McAlpine’s recollection) even appears in Michael Uva’s essay, where he mentions Turnbull recalling the ‘slashing’ of a monochrome painting and noting that ‘at least it was a reaction’.

Where the longer essays offer in-depth, focused discussions most characteristic of book-length projects on artists, the short texts on single artworks slow the reader down to focus on one person’s reflection on Turnbull and an artwork. While all the short texts are different, with some more conversational and others poetic, they all offer a particular experience of an artwork through the writer’s relationship with Turnbull, his approach to art making, and/or the artwork’s material characteristics, or its situation in space. The chronological presentation of artworks and series of artworks, together with related drawings, newly published archival photographs of exhibition installations and the artist’s studios construct a narrative context that informs these readings. For example, in the pages featuring Turnbull’s iconic totemic standing figure sculptures made over 1955 to 1957, the texts by the artists Michael Dean and Norman Dilworth take us in different directions. Where Dean sees ‘vertical collaboration and parallel noise’ in relation to Figure (1955), with Idol 2 (1956) Dilworth reflects on the significance of Giacometti’s work and interest in symbols that he shared with Turnbull, calling his sculptures ‘objects that carried meaning in terms of the life they represented’. The fact that historic and contemporary idols and totemic objects often become objects of iconoclastic attack, but Turnbull’s standing figures have not, may be a result of the artist’s assertion of the relationship between artwork and viewer, as noted in Wood’s citation of Turnbull in 1968: ‘The observer’s relation to the work should be subject-subject.’ This book offers the reader a similar proposition.

Such an eclectic array of anecdotal, historical, visual and phenomenological analyses comes across as enlightening and expansive thanks to the editorial choices and structure of the book. Wood’s introduction and chronological, well-paced approach, together with Turnbull Studio’s archival image selection and designer Herman Lelie’s generous layout and design, enable text and image to work together, encouraging selective reading and close looking, and establishing a broad narrative. Conceptually, the three sections of the book deftly move through time and space, from the post-war period, to the 1960s and 70s, and finally the 1980s and 90s, from studio, to gallery, to foundry and landscape. A hefty doorstopper, the size of the book helps to convey a sense of the scale of Turnbull’s work and the weight of his legacy. The inclusion of a fold-out page for the triptych 10-1958 (1958) makes it possible to imagine it as a material object, which Matthew Collings describes as ‘turbulent life’. A biographical timeline, list of exhibitions and catalogues and full bibliography complete this essential source for Turnbull scholars, curators and artists alike. 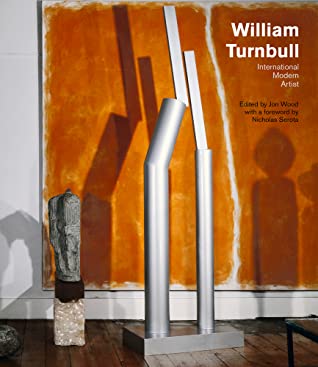